Check out my interview with Alan Gratz, author of The League of Seven:

Who is Alan Gratz?

I'm the author of a bunch of novels for young readers, including Samurai Shortstop, The Brooklyn Nine, Starfleet Academy: The Assassination Game, Prisoner B-3087, and The League of Seven. I write history, mystery, sports, science fiction, and fantasy—basically, whatever I like to read, I write! A Knoxville, Tennessee native, I'm now a full-time writer living in Western North Carolina.

I've always loved history, but even more, I've always loved the “What if?” game. What if the Axis won World War II? (Robert Harris's Fatherland, Phillip K. Dick's The Man in the High Castle, et al.) What if Charles Babbage had built his mechanical computer? (Gibson & Sterling's The Difference Engine) What if a Jewish state was established not in the Middle East, but in Alaska? (Michael Chabon's The Yiddish Policeman's Union) I can't really say what my first exposure to alternate history was, but Robert Harris's Fatherland was certainly a big book for me in college. Ever since then, I've been fascinated by the different paths life can take based on the simplest of choices.

What is The League of Seven about?

The League of Seven is the story of seven super-powered kids who use rayguns and airships and clockwork machine men to battle giant electrical monsters in an alternate America of the 1870s. So, definitely Alien Space Bats. My Alien Space Bats (the Mangleborn) rise up and destroy Europe in 1770, leaving the relatively few European settlers in the New World stranded and alone. To survive, the settlers in New England join the Iroquois League of Nations as the “Yankee” tribe, eventually becoming one of the founding members of the United Nations of America, a USA analogue that by the 1870s stretched from the east coast to the Mississippi River. The monsters are also the source of the aether used in the rayguns—a mystical energy source that's so alien (it operates on a “different geometry,” to quote Lovecraft) all humans can figure out to do with it is channel it through crystals and shoot it at each other. Since the Mangleborn feed on electricity, the world has to maintain a perpetual Victorian level of technology—which explains why the world is steampunk.

What inspired you to write your novel? 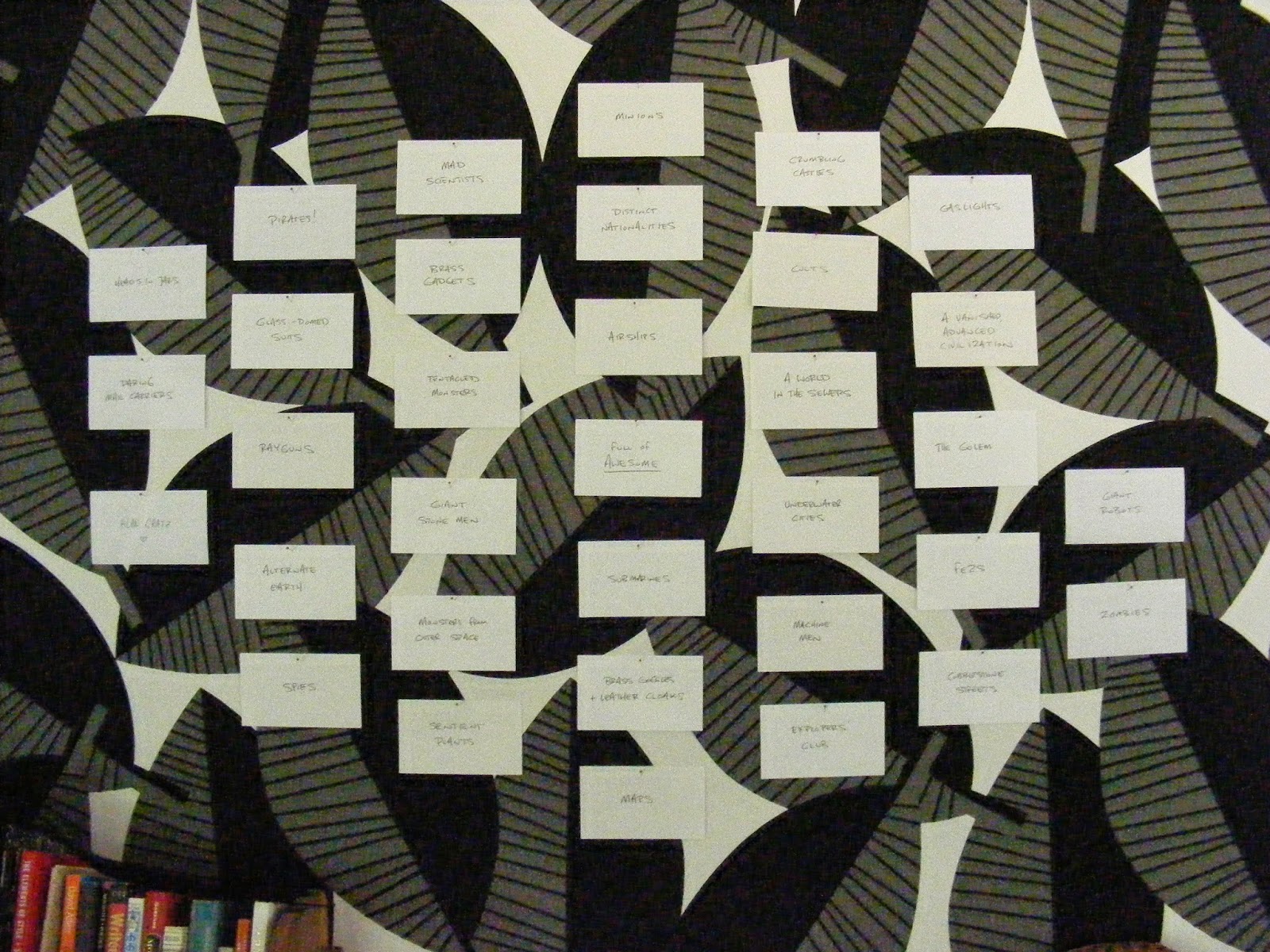 For The League of Seven, I wanted to write a book that ten year old me would think was awesome. A book ten year old me couldn't leave the bookstore or library without taking home with him. (And 42 year old me, really.) So I started with a blank bulletin board and a single notecard right in the center that said “FULL OF AWESOME.” Then I started adding new note cards all around it, in no special place or order, each with something awesome on it: Rayguns. Airships. Clockwork Machine Men. Giant Monsters. Submarines. Secret Societies. Heads in Jars. I put up maybe two dozen ideas, then sat back in my chair for a week just staring at them, trying to build a story out of as many of them as possible. Not all of them made it, but a lot of them did. The result was heroes and villains and gadgets and a world that was totally awesome. Or at least I thought so. :-)

That cover is really full of awesome, isn't it? It's done by a fabulous artist named Brett Helquist, who is also responsible for the covers on Lemony Snicket's Series of Unfortunate Events, among others. Most authors are never consulted on the covers of their own books. For each of my seven previous books, no one asked me what I wanted the cover to look like. One day it just appeared in my inbox, and the editors who sent them never even said, “What do you think?” It was always, “Here it is!” Unless you love it, they don't really want to know what you think, because they're not going to change it for you.

So when my terrific editor at Tor/Starscape, Susan Chang, e-mailed me one day to ask me what I wanted the cover to look like, I just about fell out of my chair. I told her I wasn't going to say WHAT the cover should look like, because I'm not a trained artist. Instead I put together a Pinterest board with art from a lot of my favorite book cover and comic book illustrators' work on it. One of the artists I pinned to the board was Brett Helquist. My note was, “I know we can't get him, but if we could find somebody who draws like Brett Helquist, that would be awesome.” A month later Susan called me up and told me they'd hired Brett Helquist to do the cover, and I fell out of my chair all over again. I'm so thrilled we got him to do the cover, and I couldn't be happier with the result. People say “Don't judge a book by its cover,” but I hope in this case they do.

Persistence. A lot of people want to write books, and some people actually do it. But then a lot of those people get one rejection and they're out. They either quit altogether, or they self-pub because they “just want to see the book in print.” Others keep sending out the same novel forever, flogging the same tired old manuscript for years and years and years, recycling it, rewriting it, or worse, writing sequels to a book they haven't even sold yet. If you're interested in a traditionally-published career, you can't quit when you get one rejection or two dozen rejections, and you can't cling to one manuscript to the exclusion of all else. Write one book, then rewrite it and rewrite it and rewrite it to make it the best book you can, then send it out to agents. Then, while that book is still in those agents' mailboxes, start writing the next book. A totally different book. Write it, edit it, send it out, and repeat the process all over again. That's what I did, and that's what most of the successfully published authors I know did. Write, revise, submit, repeat. It's all about persistence.
Posted by Mitro at 11:00 AM

Email ThisBlogThis!Share to TwitterShare to FacebookShare to Pinterest
Labels: Alan Gratz, Interview, The League of Seven