Comic Review: The Royals: Masters of War by Rob Williams and Simon Coleby 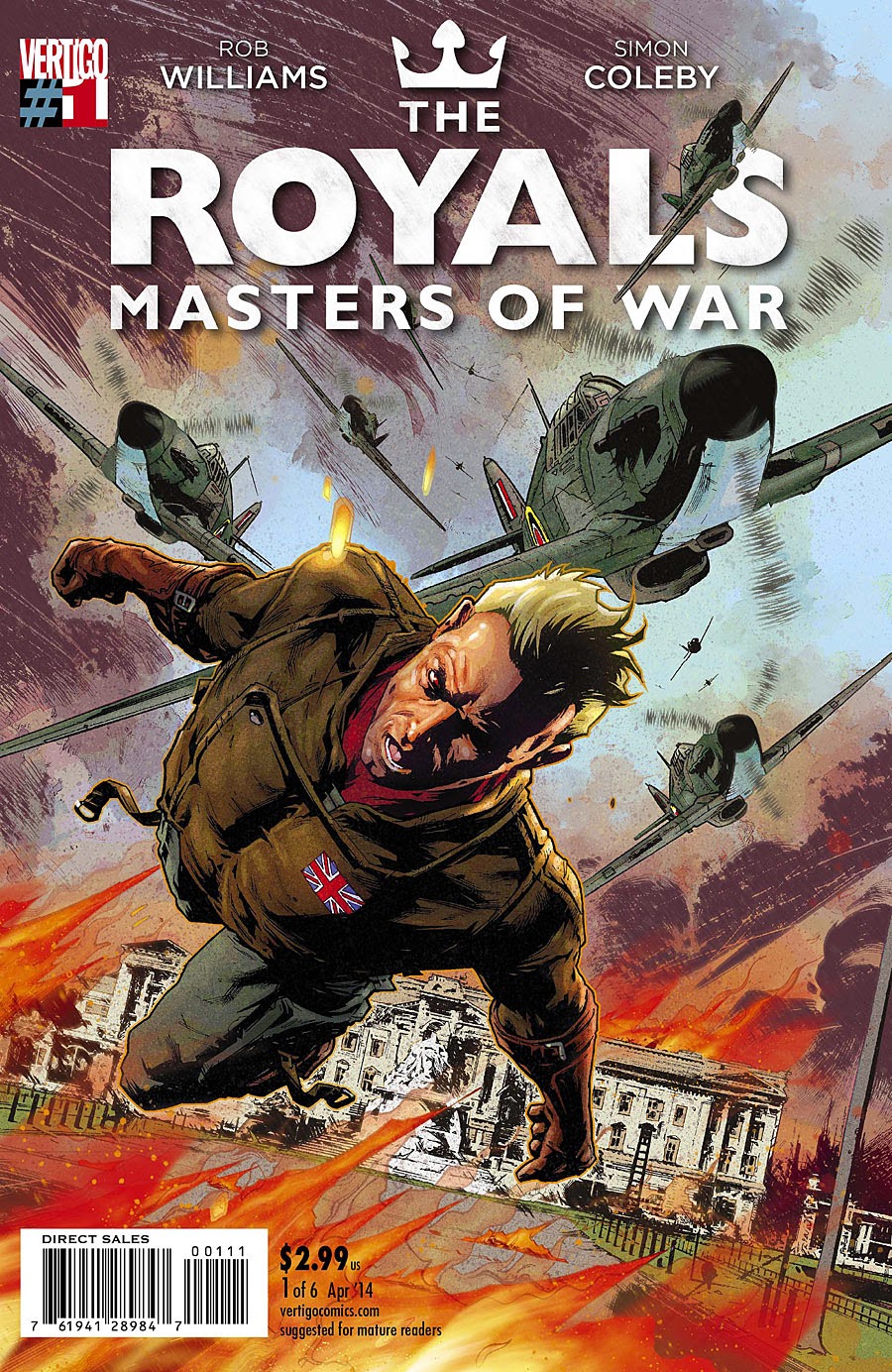 The basic background is simple.  Royal blood grants superpowers.  The purer the blood, the greater the power.  What this means is that the kings, queens and royal children all have some form of superpower for themselves.  And yet – and this is where my suspension of disbelief failed – the storyline is set in an alternate World War Two where very little has changed, save for the various Royal Families having superpowers.

This makes no sense to me.  Princes Henry and Arthur are Superman-type flying bricks, while their sister Princess Rose is a telepath and their father is a flying energy-manipulator with vast powers.  If this is the case, why are people like Hitler, Stalin and Roosevelt still in command of their nations?  Why did the Americans manage to declare independence and make it stick when George III can presumably beat the crap out of George Washington?  I am reminded of an Elseworlds story where one of Superman’s ancestors ended up working for the British Crown and stopping American independence stone-dead.  Why – exactly – are the world’s political entities the same as they are in OTL when there is such a vast change in the background?

But, leaving that aside, the story still seemed promising.  It’s 1940 and the Blitz is on, with Germany bombing the UK heavily.  The carnage stirs the heart of the idealistic young Prince Henry, who ignores his father’s orders and flies out to rip the German bombers from the skies.  Unfortunately for him, the various Royal Families had a treaty, an agreement that they (and their superpowers) would not become involved in the commoner’s war.  Now, thanks to Henry, that treaty is a dead letter.  The way is open for the other superhumans to join the fight, including the most powerful of them all, the Emperor of Japan.

The alternate Royal Family is a thoroughly dysfunctional one.  Prince Arthur is very much a cynical apoiled brat, complete with superpowers.  Prince Henry is meant to be the better person – to the point where he intervenes in the fighting – but he’s very definitely in an incestuous relationship with his sister, Princess Rose.  His mother is a madwoman with telekinetic powers and strange moments of insight.  And his father is very determined that, come what may, the family will survive.

As the war gets worse, so do they.  Henry becomes bitter and driven, Arthur drinks himself into despair (he murders at least one person out of drunken frustration), Princess Rose is driven mad and their father betrays his entire country.  (To be fair to the writer, that was one of the points that surprised me at the time, but was completely predictable in hindsight.)  In the end, almost all of the superhumans die in nuclear blasts.  Arthur deserves note for coming up with the funniest line in the comic, asking Hitler to get him a drink.

There are moments to like in this comic, but there are also too many issues to easily surmount.  For example, how were the Nazis and the Communists able to kill off their Royal Families?  There are only a handful of surviving Russian and German Royals, all very weak compared to the British or Japanese.  Where did the handful of very weak American Royals come from?  And why did the Japanese still lose the war if their ruler is vastly more powerful?  Coming to think of it, where did the superpowers come from in the first place?

Maybe the ultimate lesson is that humanity has spent years learning how to kill more dangerous creatures than the average human <grin>.

I've often thought about a story where magical societies accidentally become involved in World War Two (and some people argue that happened in Harry Potter’s backstory) but it would have to change the entire world.  But if magic exists, it would change history unpredictably.  And the Germans should have had magic themselves.  This universe should have gone the same way.

In many ways, it reminds me of Ex Machina.  An ending that is ambiguous, a storyline that jumps around far too much and, in the end, doesn't live up to its promise.

Christopher Nuttall is a long-standing alternate history fan and writer, author of The Royal Sorceress (alternate history/fantasy) and numerous Kindle books.  His webpage can be found here.
Posted by Mitro at 10:00 AM