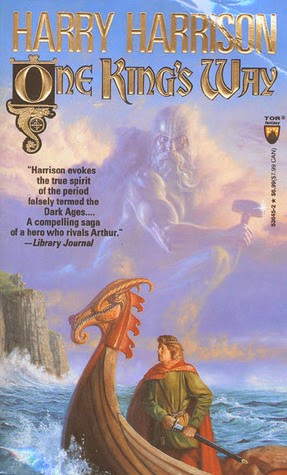 Although this may be a retro review, I have been meaning to finish the Hammer and the Cross trilogy ever since Harry Harrison passed away. So I spent some of my birthday money on an old paperback copy of One King's Way, the second book in the trilogy about the English slave who became a king and put the world on a new path of enlightenment, and checked to see whether it met the high expectations I got from its predecessor The Hammer and the Cross.

I hope you don't mind if I use more spoilers than usual in this review. This book was published in 1994, exactly twenty years ago, so its really your own fault if you haven't read it yet and still want to read this review.

As mentioned before, the hero of our story is a former English slave and son of a Viking raider (or Viking god depending on what you believe) named Shef. In the first book Shef had risen through the ranks of the Great Heathen Army of 865, discovered new inventions to help the English later defeat the Viking invaders and overthrow the harsh rule of the Catholic Church. Now co-King of a religiously tolerant England with Alfred of Wessex and the believed "chosen one" of the "Way of Asgard" an inquisitive and less-sacrificial version of the Norse religion, Shef is nonetheless unhappy. His former lover (and step-sister) has married Alfred, so Shef is taking the English fleet, armed with the new catapult armed "battleships", and is going on campaign to defeat the remaining Ragnarssons before they can attack England again.

On the way across the North Sea, Shef's fleet runs into the Ragnarssons' ships and battle ensues. The English and their Norse allies are victorious, but Shef's ship is beached and he is almost killed when the Ragnarsson flagship attacks. Cut off from his men and lost in the Ditmarsh, Shef needs to find a way home but inevitably ends up adventuring through much of Scandanavia. On the way he is almost sold into slavery, is tested by the Way, gets seduced by a Norwegian Queen, gets chased by Finns and has stop the brutal sacrifices at Uppsala. Meanwhile the Christians are reeling from their defeat in England and seek to prevent the spread of Shef's heresy by refounding the Holy Roman Empire under a new leader. To do this they seek the Spear of Destiny, which they believe is somewhere in Scandinavia. To secure this symbol of the Church, they send the newly formed Knights of the Lance under the leadership of the charismatic German noble Bruno, who could either be Shef's new ally or his greatest enemy.

Generally I liked the book. The whole series reminds me a lot of Turtledove's Agent of Byzantium, especially the parts where Shef and his friends try to find new technologies to give them an edge against the brute strength of their enemies (such as an ironclad Viking warship). I was absorbed in the "medieval-punk" setting and cared about Shef's ultimate fate. Its the fantasy elements in the story that made me pause and reconsider whether this was a "good" book.

In the first book there was ambiguity about whether or not magic exists in this alternate history. Shef has visions and as mentioned before may or may not be the son of the Norse god Rig. Nevertheless this ambiguity was handled well as the reader could believe the Norse gods were real and influencing events on Earth, or this was all just superstition of ignorant people who would eventually be shown the light by the advancements created under Shef's new society. In One King's Way things get a little out of hand. The ambiguity of the first book is replaced with brief scenes where the gods debate about what to do about Shef and Killer Whales are apparently sent by the imprisoned Loki to kill Shef.

On top of that is the discovery of the "Hidden Folk", who gave inspiration to the trolls and other monsters of Norse mythology. In reality they are a near-human species who although physically stronger than humans had to go into hiding after humans learned to fight with metal weapons. They still can breed with humans (and they still do so), but generally avoid humans altogether and they are expert sneakers. The story tried to imply that the Hidden Folk are Yetis or Bigfoots, but that just made them even more silly in my opinion and made it hard to take seriously. This especially became annoying when they were turned into a deus ex machina to help Shef out of binds, like talking to Killer Whales to attack enemy ships and silently kill a Finn's reindeer to get him to believe Shef had magical powers.

I don't know whether to blame Harrison or John Holm (the pseudonym for the Tolkien scholar Tom Shippey) for the overuse of fantasy in the story. I did think it was a nice touch when they implied that the Christians are right as well. The Spear actually does bring victory to the holder and Shef is granted a vision of Jesus dying on the cross where he sees the face of the their god in the Sun. Does this mean all religions are right? Are there other gods running around the world and influencing events? How did they come to be? Is it simply by the belief and sacrifice of their followers (i.e. Gaiman's American Gods) or is it something else? Irregardless, I think Stirling handles the magic vs. real world balance better in his Emberverse books.

To end a very long review, despite my beef with the fantasy elements in the story, I found One King's Way to be an engaging alternate history of the medieval world. I probably will pick up the next book, King and Emperor, although it will probably be a while since my review pile is getting precariously high again. If you can stand the many fluttering of alien space bats, I highly recommend this classic work of the genre.