Today's Timeline Thursday comes after an exhausting search for an old work from the Golden Age of Online Alternate History. After reaching out to members of the community for some help and using the Wayback Machine, I finally found what I was looking for: "The Irish Empire" by John J. Reilly.

The timeline is actually a short summary of a fictional book. It tells the story of an Ireland that is conquered by the Roman Empire and grows to become a major maritime power after the fall of the Western Empire. Some of its accomplishments include discovering North America in the 700s and converting the Eastern Slavs to Roman Christianity. Yes, I know this sounds like a typical wank, but like many great works of fiction, its the bad guy that makes the story stand out.

In this case the bad guy is the Quetzal League, a Native American civilization that began after a Mississippian culture absorbed the Mesoamerican civilizations. Their culture was likened to the Indus Valley Civilization by the fictional author for its stark uniformity, but it is almost Lovecraftian with its culture of self-obliteration and desire to spread its teaching across the world. It is only stopped in 1989 when the Quetzal League mysteriously collapses in a fit of mass suicide that is meant to parallel to the fall of the Soviet Union.

"The Irish Empire" is a delightful critique of our own history which just enough touch of the weird to make it truly memorable. I was happy to discover there are still others who have fond memories of Reilly's work, not just from the people who helped me find the old website, but also from this map I found on AlternateHistory.com that shows SRegan's intepretation of what the world of "The Irish Empire" looks like: 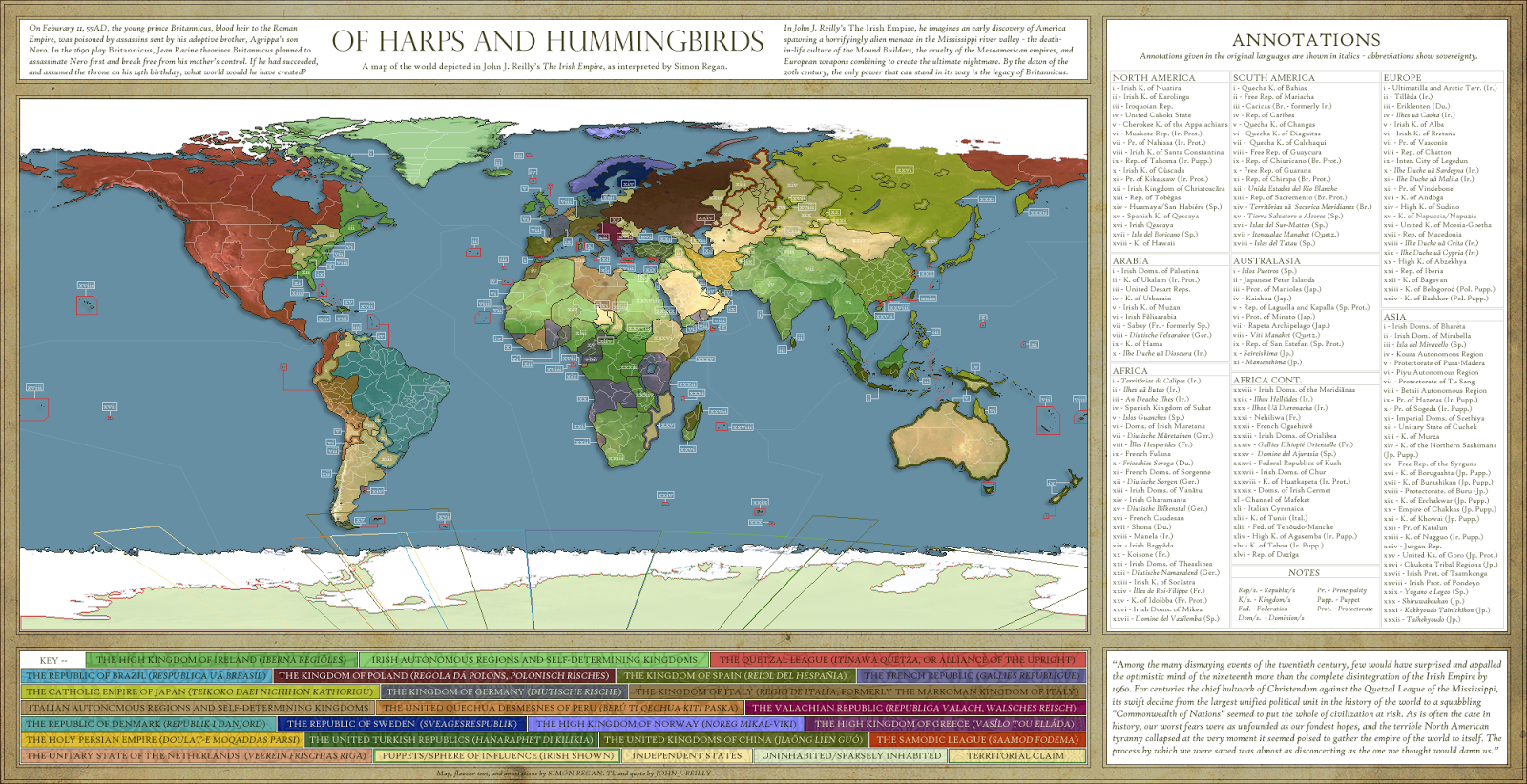 Sadly this post does not have a happy ending. By seeking out the old timeline I was reminded by the fact that John Reilly is no longer with us. Back when the community was much more decentralized, I must have visited John's site dozens of times looking for updates or new works. It is still sad to know I won't be able to do that anymore. You can still see his old site thanks to the Wayback Machine and I highly recommend you take a moment and check out "The Irish Empire" and other works by John Reilly.