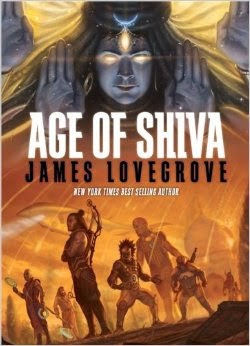 Of course I would read the last book in a series first. Makes complete sense right? Luckily for me James Lovegrove's Pantheon series is made up only of stand-alone stories set in different godpunk universes. So I could jump right into Age of Shiva with little to no fuss. That is certainly a pro for this book and I have barely begun to review.

The story follows British comic book artist Zachary "Zak Zap" Bramwell. He is shanghaied by three powerful billionaires who fly him to the Maldives to do the unthinkable: design the costumes for a real-life super hero team based on the ten avatars of Vishnu from the Hindu religion. They have real powers as well and they are about to be unveiled to the world. Given every fanboys dream, Zak immediately signs up. Before too long demons, monsters and evil gods pop up and the avatars are set out to do battle. Meanwhile, Zak begins to suspect there is more going on and his investigations into how these supposed "gods" are being created may not end well for him.

Age of Shiva is fun superhero tale based around the beliefs of the world's largest pagan religion. The writing is humorous, violent and realistic, with the characters have the desires and vices of normal humans, just with the ability to slow down time or breathe underwater. Hindu heroes and deities fit well into the general superhero mythos that we know, which is natural if you compare the tales of Homer with modern comics.

I was disappointed by the ancient aliens connection because the trope been overdone as of late. You mean to tell me all of humanity's accomplishments are just derivatives of some extraterrestrial's science that was showered on us dumb monkeys? I've been reading plots like this for some time now and I, and probably everyone else, are getting a little burned out by it.

I don't think I really spoiled anything for potential readers by bringing that up. I still left out the major twist at the end. I will leave that discovery to you dear reader if you choose to pick up a copy of Age of Shiva, which I highly recommend that you do, despite my misgivings about altruistic aliens. Thanks again to My Bookish Ways for giving me a chance to read and review this story. I think I might have to pick up the earlier books in the series now.