Age of Shiva by James Lovegrove

Zachary Bramwell, better known as the comics artist Zak Zap, is pushing forty and wondering why his life isn t as exciting as the lives of the superheroes he draws. Then he s shanghaied by black-suited goons and flown to Mount Meru, a vast complex built atop an island in the Maldives. There, Zak meets a trio of billionaire businessmen who put him to work designing costumes for a team of godlike super-powered beings based on the ten avatars of Vishnu from Hindu mythology. The Ten Avatars battle demons and aliens and seem to be the saviours of a world teetering on collapse. But their presence is itself a harbinger of apocalypse. The Vedic fourth age of civilisation, Kali Yuga, is coming to an end, and Zak has a ringside seat for the final, all-out war that threatens the destruction of Earth. 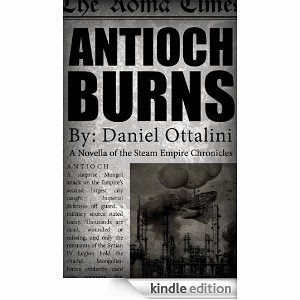 When a scouting expedition goes disastrously wrong, Marius Quinctius Regillus finds himself in a horde of trouble. With the Mongols encircling the grand fortress city of Antioch, Regillus and his men are trapped between a governor’s ambitions and the Mongolian weaponry. With nowhere to turn, can they save the city, or will Antioch Burn?

Discover a new threat to the industrial Imperium of Rome in Antioch Burns, the latest novella by award-winning author Daniel Ottalini.

Cherie Priest's long-awaited steampunk debut, Boneshaker, opens in the early days of the Civil War when rumors of gold in the frozen Klondike brought hordes of newcomers to the Pacific Northwest. Anxious to compete, Russian prospectors commissioned inventor Leviticus Blue to create a great machine that could mine through Alaska’s ice. Thus was Dr. Blue’s Incredible Bone-Shaking Drill Engine born.

But on its first test run the Boneshaker went terribly awry, destroying several blocks of downtown Seattle and unearthing a subterranean vein of blight gas that turned anyone who breathed it into the living dead.

Now it is sixteen years later, and a wall has been built to enclose the devastated and toxic city. Just beyond it lives Blue’s widow, Briar Wilkes. Life is hard with a ruined reputation and a teenaged boy to support, but she and Ezekiel are managing. Until Ezekiel undertakes a secret crusade to rewrite history.

His quest will take him under the wall and into a city teeming with ravenous undead, air pirates, criminal overlords, and heavily armed refugees. And only Briar can bring him out alive.

War of the Vikings by Paradox

War of the Vikings delivers the next generation of Paradox’s close quarter combat focused brands that moves the setting to the Viking Age. All of these factors enabled us to create a game experience that has an increased intensity, improved accessibility, and more intuitive combat experiences ensuring you’re always presented with interesting choices.

Launch onto the battlefields of the Viking Age in intense close quarter combat, where skill beats strength and the possibility of death is always one opponent away.