Check out my chat with Bruno Lombardi. He is one of the authors featured in Altered America, the new alternate history anthology by Martinus Publishing.

Welcome to The Update, Bruno. Tell the readers about yourself. 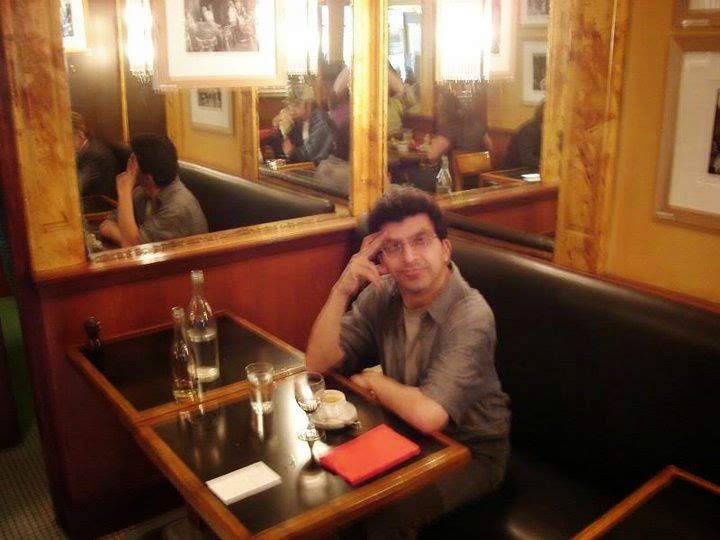 Remember that one guy in university who everyone agreed was really bright but was also really, really unfocused? The guy who could get straight B’s in courses by writing a 15 page paper the night before it was due? The guy who switched his major more often than most people switch jobs? The perennial ‘professional student’?

Yeah—that was pretty much me during most of the 90’s.

It wasn't a complete loss, mind you; I ended up with a double major in psychology and anthropology, with a certificate in addiction studies thrown in for good measure. I also ended up with an amazing collection of friends, as well as an equally amazing collection of stories and adventures and experiences. After bouncing around in the ‘real world’ for a while, I ended up by pure dumb luck getting a job working as a civil servant for the Canadian government in September 2001. Been working in various positions in the civil service since then.

My first introduction to alternate history was the 1988 novel Fire on the Mountain by Terry Bisson. It is an alternate history describing the world as it would have been had John Brown succeeded in his raid on Harper's Ferry and touched off a slave rebellion in 1859, as he intended. Been following the genre ever since.

As a Canadian, do you know of any popular what ifs in Canadian history?

What if in 1776, when Ben Franklin went to Canada to make an alliance, the Canadians decided to join the War for Independence?

How did you find out about Altered America?

Several of my short stories have been published in various anthologies by Martinus Publishing and he’s well aware of my interest in alternate history. So when he came up with the anthology idea, he literally gave me a personal heads up about it.

What are your stories in Altered America about?

I have two short stories in the anthology.

The first one is "A single decision", which involves a slightly different 9/11. It’s based on a real incident where the military was planning to send up fighter jets to intercept the hijacked planes. However, due to various circumstances, none of the fighter jets were able to be armed. Nevertheless they were still planning to send up unarmed fighter jets. However, by the time the decision was made, all of the jets had already crashed. In my story, the decision is made a little quicker.

The second story is "The Road was lit by Moon and Star". In that one, the Apollo 11 landing ends in a catastrophic disaster, killing Armstrong and Aldrin. So now the hopes and dreams of the first successful manned Moon landing rest with Apollo 12, and Commander David Daniel Thomas Patton. The story is a bit experimental in writing style, as it’s told with multiple flashbacks and flashforwards, chronicling his journey, in every sense of the word, to the Moon.

Are there any other stories in the anthology you would like to recommend?

I was privileged to have a sneak peek at several of the stories before they got into the anthology. Many of them are good but Jason Sharp’s "The Shining Path" is very well-done. It follows a Hunter S. Thompson-like writer in 1970’s US-occupied Quebec.  As both a fan of Hunter Thompson and a Quebecer by birth, it obviously resonated with me on several levels.

What are the names of your other stories published by Martinus?

Quite a few. Here's a link to all my published stories (so far). Oh - and yes, I have a novel coming out in just a few weeks. See the link for more details.

Do you have any other stories in the works?

Several things are in the works. The first is a novel titled The Coin. It’s a bit of a different take from my usual style, much ‘darker’ and serious. The basic premise is that the thirty pieces of silver that were given to Judas to betray Jesus have become, essentially, both evil and sentient. The novel has two parallel plots; the first follows the pieces of silver—and the people they've interacted with—through the last 2000 years of history. The second is centered on a young man who can best be described as a ‘nice but slightly messed up loser’ trying to get his life back together again and opening up a bed and breakfast in a small town in present-day Newfoundland. I’m not giving anything away when I tell you that there’s a connection between him and the coins.

I also have several short stories in the works, including a steampunk story set in late 19th century Malaysia.

What are you reading right now?

Under Heaven by Guy Gavriel Kay. Absolutely fantastic novel set in eight-century China. It has, literally, a bit of everything; magic realism, political intrigue, history, battles, romance, everything. I can’t recommend it enough.

Do you have any advice for aspiring authors?

Just keep at it. Always, always, always just keep writing. I've had many people ask me over the years where I get my ideas and it always astounds me when I get asked that question, because there are stories going on all around us all the time! If you’re an aspiring author, then just open your eyes and look around you at all the stories occurring around you. And then just write them down.
Posted by Mitro at 11:00 AM