For the inaugural Flag Friday post, I bring you the work of Sean Sherman, originally posted on his blog Other Times. Sean has been kind enough to allow me to repost his Flag Friday post's here on The Update. Support an alternate historian by subscribing to his blog! - Matt 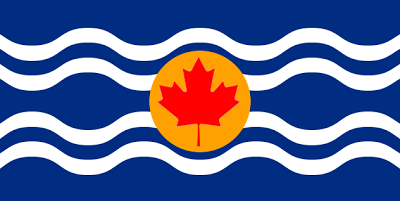 The flag for this version of Canada was created at a time when various British holdings in the Caribbean were being annexed into Canada. The blue with the white wavy lines represent the oceans that connect the vast nation. The maple leaf which dominates its center represents the people of the original territories. The flag is a bit wider than most others in the world to show the vast scope of the nation's lands.

Please be sure to check out the original post to learn more about this version of Canada.

Do you have a flag you would like us to consider for Flag Friday? Email us at ahwupdate at gmail dot com.