If you are planning to buy any of these books, please click on the links to Amazon below and support The Update!

What if our civilization is more advanced than we know?

The New York Times bestselling author of Daemon--"the cyberthriller against which all others will be measured" -Publishers Weekly) --imagines a world in which decades of technological advances have been suppressed in an effort to prevent disruptive change.

Are smart phones really humanity's most significant innovation since the moon landings? Or can something else explain why the bold visions of the 20th century--fusion power, genetic enhancements, artificial intelligence, cures for common disease, extended human life, and a host of other world-changing advances--have remained beyond our grasp? Why has the high-tech future that seemed imminent in the 1960's failed to arrive?

Perhaps it did arrive...but only for a select few.

Particle physicist Jon Grady is ecstatic when his team achieves what they've been working toward for years: a device that can reflect gravity. Their research will revolutionize the field of physics--the crowning achievement of a career. Grady expects widespread acclaim for his entire team. The Nobel. Instead, his lab is locked down by a shadowy organization whose mission is to prevent at all costs the social upheaval sudden technological advances bring. This Bureau of Technology Control uses the advanced technologies they have harvested over the decades to fulfill their mission.

They are living in our future.

Presented with the opportunity to join the BTC and improve his own technology in secret, Grady balks, and is instead thrown into a nightmarish high-tech prison built to hold rebellious geniuses like himself. With so many great intellects confined together, can Grady and his fellow prisoners conceive of a way to usher humanity out of its artificial dark age?

And when they do, is it possible to defeat an enemy that wields a technological advantage half a century in the making?

A Clockwork Heart: Book Two in The Chronicles of Light and Shadow

As the proprietor of Disenchanted & Co. in a steampunk version of America, Charmian “Kit” Kittredge makes her living solving magical crimes. But when a snobbish lady begs for help, saving her reputation might very well cost Kit her life.

Doing a favor for deathmage Lucien Dredmore, Kit agrees to interview a newly widowed lady as a potential client. Upon meeting, however, she learns that the woman in question is none other than Lady Eugenia Bestly, president of the Rumsen Ladies Decency Society— someone who once led a vicious campaign to ruin Kit’s life. Ironically Lady Bestly now lives in fear herself, for the press is about to unmask her husband as the savage “Wolfman” who died while terrorizing the city.

As monstrous rampages continue to occur, Kit soon determines there is more than one Wolfman, and that they may themselves be victims of evil players. While avoiding both mechanized assassins and attempts by Dredmore and Chief Inspector Tom Doyle to take her under their protection, Kit follows a tangled path that leads from a prestigious gentlemen’s club fronting a hellish secret to a vengeful native tribe and dangerous, ancient magics. 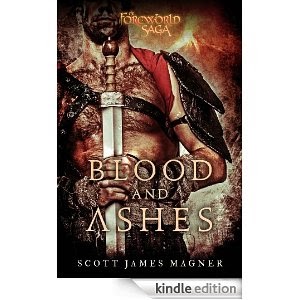 SideQuests are stand-alone stories or novellas that chronicle the heroes, villains, and adventures in The Foreworld Saga across numerous eras and ages. They can be read in any order with or without prior knowledge of The Foreworld Saga.

As Mt. Vesuvius rumbles ominously, Pompeiian Councilor Valerius needs assistance in performing rituals to protect the city from the wrath of the fire-god, Vulcan. But his agenda is far from benevolent, as he cares less about quieting the volcano than taming it and taking the power for himself.

Now it’s up to Horatius, a former legionnaire and gladiator, to prevent Valerius’s sinister rites from coming to fruition. But with Vesuvius looming over the city—and the dead rising to defend the corrupt councilor—the warrior might have fled a troubled past only to have entered a doomed future…