SF has been accused of being a boys-only club and alternate history is no exception. With a few exceptions, many female writers in the genre stick to the steampunk side. Most protagonists in our favorite stand-alone stories are men (although Turtledove and Stirling have both made efforts to include important female POV characters in their longer series). Fans of the genre as well tend to be men in the 25-34 age range (if the Alternate History Facebook page I administer is any guide).

Do I have any hard evidence to prove this? No, but it is something I am interested and I am hoping to learn more about in the future. Stay tuned.

The big news from last week was the release of If Kennedy Lived by Jeff Greenfield (author of The Everything Changed and 43*). For those who missed it, here is the description from Amazon:


From one of the country’s most brilliant political commentators, the bestselling author of Then Everything Changed, an extraordinary, thought-provoking look at Kennedy’s presidency—after November 22, 1963.

November 22, 1963: JFK does not die. What would happen to his life, his presidency, his country, his world?

In Then Everything Changed, Jeff Greenfield created an “utterly compelling” (Joe Klein), “riveting” (The New York Times), “eye-opening” (Peggy Noonan), “captivating” (Doris Kearns Goodwin) exploration of three modern alternate histories, “with the kind of political insight and imagination only he possesses” (David Gregory). Based on memoirs, histories, oral histories, fresh reporting, and his own knowledge of the players, the book looked at the tiny hinges of history—and the extraordinary changes that would have resulted if they had gone another way.

Now he presents his most compelling narrative of all about the historical event that has riveted us for fifty years. What if Kennedy were not killed that fateful day? What would the 1964 campaign have looked like? Would changes have been made to the ticket? How would Kennedy, in his second term, have approached Vietnam, civil rights, the Cold War? With Hoover as an enemy, would his indiscreet private life finally have become public? Would his health issues have become so severe as to literally cripple his presidency? And what small turns of fate in the days and years before Dallas might have kept him from ever reaching the White House in the first place?

As with Then Everything Changed, the answers Greenfield provides and the scenarios he develops are startlingly realistic, rich in detail, shocking in their projections, but always deeply, remarkably plausible. It is a tour de force of American political history.

Greenfield, of course, has been promoting the heck out of his new novel. Check out the interviews he did on msnbc and The Daily Caller. I'm not too happy with msnbc interview. I don't like it when people use the word "obsession" with alternate history. Its not like someone who writes a cook book is accused of having an "obsession with cooking. Meanwhile, you can also check out an article written by Greenfield on Yahoo where he discusses his book and the history behind it.

Not everyone, however, finds this book plausible. H.W. Brands' review on The Washington Post argued that the popular scenario that Kennedy would have prevented increased American intervention in Vietnam is implausible because "the American effort in Vietnam looked promising to most observers until very late in what would have been that second term. Of course, Greenfield’s Kennedy is blessed with the author’s hindsight. Real presidents aren’t so fortunate."

How do you think Kennedy's presidency would have played out if he had lived? Does Greenfield get it right?

Fans of steampunk might be interested in this new anthology from Dark Quest Books. Edited by Neal Levin and Danielle Ackley-McPhail, Clockwork Chaos is an anthology of steampunk stories currently available on Amazon. Here is the description from the press release.


Finding Order Out of Chaos…

History, invention, the power of deduction… Clockwork Chaos is more than goggles and gears. It is about order and structure and timing striving for mechanical perfection. But in an era where mass production does not yet exist, the unique machinery brought forth into the world is at times bound to fall short of the goal. This chaos turns the science into mayhem and when the gears spring forth this mechanical viscera is indicative of a world turned inside out. Join us in our journey through the shine of society to the dark steamy underbelly of grit and crime.

Thirteen stories of steam-driven genius plumb the depths of human intrigue even as they raise our vision to the skies. Patrick Thomas’s Spellpunk tale Deadly Imitation turns the Ripper into a tourist attraction. Gail Gray’s The Foxglove Broadsides uses the power of the press to bring down the political machine. And Jeff Young’s Ambergris in Ice gets to the grist of the matter on the issue of smuggling. Necessity may be the mother of invention, but read on to discover how mods make the man.

As always, if you read any of the books we mention on The Update, let us know. We can post your review and help promote any of your alternate history projects as well. Just remember to contact us at ahwupdate at gmail dot com. 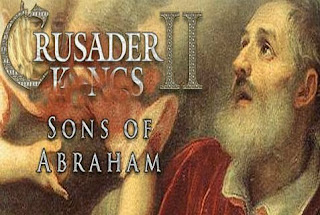 Listed as one of the top video games for researching your alternate history by Daniel Ottalini (author of Brass Legionnaire and Copper Centurion), Crusader King II has a new expansion coming out called Sons of Abraham. The expansion will introduces new features focusing on the big three religions of Medieval Europe: Christianity, Judaism and Islam.

As explained from the press release: "Plunge into the powerful and profitable world of Papal politics, appointing your bishops, gaining influence with the College of Cardinals and reap the rewards of the Pope’s money and favours. Show your devotion with the Holy Orders; their clout will come in handy when you want to expel troublesome relatives to a monastery!  Pick sides of the Islamic debate, choosing to follow the rationalist Mutazili or opposing Ashari or play as a Jewish lord and restore the Kingdom of Israel (now this scenario I liked). Crusader Kings II: Sons of Abraham features hundreds of new religious events no matter what doctrine you follow!"

You can learn more by checking out the recent developer diary. Crusader Kings II: Sons of Abraham will release on all major digital-download portals on November 18, 2013.

There are a whole host of YouTube videos for alternate historians to check out. First up, Epic Rap Battles of History returns with Al Capone vs. Blackbeard:
Next up, the trailer for Aerena - Clash of Champions, a steampunk turn-based combat game, now in the alpha stage:
Enjoy!

Nov 1: Valley Catholic High School of Oregon drama department begins its run of the steampunk version of "As You Like It".

DJ Taylor's top 10 counter-factual novels at The Guardian.
Einstein Must Die! - A novel with a steampunk twist on US history at The Sacramento Bee.
Free Steampunk Reads by omgrey at Steamed!
How to write the world of INCEPTIO and PERFIDITAS by Alison Morton at Let us Talk of Many Things; of Books and Queens and Pirates, of History and Kings...
The Martian at the Parthenon by Matthew Buchholz at Slate.
Tales of the Wold Newton Universe, Part 1 of 4 by Christopher Paul Carey at Black Gate.

An Alternate History of the Government Shutdown by Rick Klein at Taegan Goddard's Political Wire.
A Baseball Counterfactual: How Will Red Sox Fans Remember the Tigers Series? by Gavriel D. Rosenfeld at The Counterfactual History Review.
President Romney's Obamacare Problem by Christopher Flavelle at Bloomberg.
So here’s an interesting historical counterfactual scenario at CAMaraderie.


InSomnia is a diesel-punk MMO but you wouldn’t know it from this trailer by Julian Benson at IndieN.
Screenshots of PS4 exclusive The Order: 1886 remind us of Gears of War by Wesley Yin-Poole at EuroGamer.net.

After Earth at Amazing Stories.
The Alchemist of Souls by Anne Lyle at Bookworm Blues.
Cold Magic by Kate Elliott at Staffer's Book Review.
The Cowboy and The Goliath by Iann Robinson at Crave Online.
Elementary 2.5: Ancient History at Thinking about books.
Fiendish Schemes by KW Jeter at Locus.
Fires of Alexandria by Thomas K. Carpenter at Carole P. Roman.
The Harker Legacy by Teel James Glenn at Innsmouth Free Press.
Liverpool Fantasy by Larry Kirwan at NJ.com.