Book two in The Mysteries of New Venice, the steampunk adventure series The Guardian called a "magnificent achievement"

It's 1907 in the icily beautiful New Venice, and the hero of the city's liberation, Brentford Orsini, has been deposed by his arch-rival -- who immediately assigns Brentford and his friends on a dangerous diplomatic mission to Paris.

So, Brentford recruits his old friend and louche counterpart, Gabriel d'Allier, underground chanteuse and suffragette Lillian Lake, and the mysterious Blankbate--former Foreign Legionnaire and leader of the Scavengers, the city's garbage collecting cult--and others, for the mission.

But their mode of transportation--the untested "transaerian psychomotive"--proves faulty and they find themselves transported back in time to Paris 1895 ... before New Venice even existed. What's more, it's a Paris experiencing an unprecedented and crushingly harsh winter.

They soon find themselves involved with some of the city's seediest, most fascinating inhabitants. But between attending soirees at Mallarmé's house, drinking absinthe with Proust, trying to wrestle secrets out of mesmerists, and making fun of the newly-constructed Eiffel Tower, they also find that Paris is a city full of intrigue, suspicion, and danger.

For example, are the anarchists they encounter who are plotting to bomb the still-under construction Sacre Coeur church also the future founders of New Venice? And why are they trying to kill them?

And, as Luminous Chaos turns into another lush adventure told in glorious prose rich in historical allusion, there's the biggest question of them all: How will they ever get home?

The Osiris Curse: A Tweed & Nightingale Adventure by Paul Crilley

Steampunk Sherlock Holmes meets The X-Files with a dash of romantic tension and a large dose of adventure.

When Nikola Tesla is murdered and blueprints for his super weapons are stolen, Tweed and Nightingale are drawn into a global cat and mouse chase with his killers. What's more, it seems that the people who shot Nikola Tesla are the same people responsible for Octavia's mother's disappearance. As the two cases intertwine, Tweed and Nightingale's investigations lead them to a murdered archeologist and a secret society called The Hermetic Order of Osiris. Fleeing the cult's wrath, they go undercover on the luxury airship, The Albion, setting out on her maiden voyage to Tutankhamen's View, a five star hotel built in the hollowed-out and refurbished Great Pyramid of Giza.

In Egypt, the duo begin to unravel the terrible truth behind Tesla's death, a secret so earth-shattering that if revealed it would mean rewriting the entire history of the world. But if the cult's plans aren't stopped, Britain may lose the future.

Hunter of Sherwood: Knight of Shadow by Toby Venables

Guy of Gisburne has a story, one the liar Robin Hood has obscured for centuries. In legend he was the Sheriff of Nottingham's henchman, the man who could not defeat Hood. But this errant knight, spy for the crown and hunter of Sherwood was never anyone's accomplice, or petty hoodlum. This thrilling reinvention of the Robin Hood legend is the beginning of a major new series. As George MacDonald Fraser's Flashman reinvented a character from Tom Brown's Schooldays, so Toby Venables finds Guy of Gisburne a character in the most thrilling episodes of his age.

England, 1191. Richard the Lionhearted, cutting a swathe through the Holy Land in his quest for glory, has left the realm bankrupt and leaderless. Only Prince John, his name blackened by the lies of his enemies, seems willing to fight back the tide of chaos that threatens the heart of England – a wave of anarchy embodied by the traitorous troublemaker known as 'the Hood'. • But John has a secret weapon: Guy of Gisburne – outcast, mercenary, survivor of Hattin, and now knight – a man wronged by Hood, disavowed, disinherited and all but destroyed by Richard. As an agent of John, he is sent to do his bidding and outwit enemy agents bent on England's destruction. With his world-weary squire Galfrid in tow, and equipped with some deadly 12th century gadgetry, Gisburne's first quest takes him from the Tower of London, along the pilgrim routes of France to the hectic crusader port of Marseille – leading him into increasingly brutal, bloody encounters with the man they call 'The White Devil': the fanatical Templar, Tancred de Mercheval. • Relentlessly pursued on his way back to England, and aided by the beautiful Mélisande de Champagne – who has a secret of her own – Gisburne battles his way with sword, lance and bow. Through icy mountain passes and wolf-infested forests, he hurtles towards the inevitable, bitter confrontation at the Castel de Mercheval. But beyond it – if he can survive – lies an older and even more unpredictable adversary. 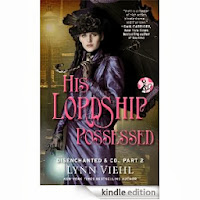 The second half of Disenchanted & Co.—the thrilling conclusion. In a steampunk version of America that lost the Revolutionary War, Charmian (Kit) Kittredge makes her living investigating magic crimes and exposing the frauds behind them. While Kit tries to avoid the nobs of high society, as the proprietor of Disenchanted & Co. she follows mysteries wherever they lead.

Lady Diana Walsh calls on Kit to investigate and dispel the curse she believes responsible for carving hateful words into her own flesh as she sleeps. While Kit doesn’t believe in magic herself, she can’t refuse to help a woman subjected nightly to such vicious assaults. As Kit investigates the Walsh family, she becomes convinced that the attacks on Diana are part of a larger, more ominous plot—one that may involve the lady’s obnoxious husband.

Sleuthing in the city of Rumsen is difficult enough, but soon Kit must also skirt the unwanted attentions of nefarious deathmage Lucien Dredmore and the unwelcome scrutiny of police Chief Inspector Thomas Doyle. Unwilling to surrender to either man’s passion for her, Kit struggles to remain independent as she draws closer to the heart of the mystery. Yet as she learns the truth behind her ladyship’s curse, Kit also uncovers a massive conspiracy that promises to ruin her life—and turn Rumsen into a supernatural battleground from which no one will escape alive.