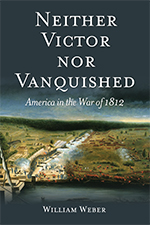 The bicentennial of the War of 1812 provides an excellent opportunity to use alternative history to recognize the importance of a conflict that historians have labeled as both “the strangest war in our national history” and a “forgotten conflict.”  At the most basic level, Henry Adams' “had only X done Y” approach to alternative history in his classic study of the war identifies tactical and operational decisions that could have changed the outcomes of numerous battles and campaigns. He generally reserved this formulation for analyzing the performances of American and British senior officers whose performance he found wanting, often noting how their more competent opponents could have further exploited the situation. For example, Adams wrote extensively on General William Hull’s star-crossed invasion of Canada and his eventual surrender of his entire army to Maj. Gen. Isaac Brock in Detroit.  He identified a number of alternative outcomes, strongly indicating that Hull’s debacle, while tragic, was eminently avoidable.

Such events and turning points can be woven into broader scenarios based on key factors or variables that could have altered history on a broader scale.  One such factor is that the War of 1812 was very much a product of the Napoleonic wars in Europe that could have ended sooner or later than 1815.  Meanwhile, the talents of individual generals heavily shaped military operations on both sides of the Atlantic. J. P. Riley’s study of the Napoleonic wars notes, “At the end of the day, the personal qualities of the allied field commander may well be the major factor in determining the success or failure of a coalition force at an operational level.”  Juxtaposing these two factors, we can imagine a brief War of 1812 that truly was “a mere matter of marching” for the United States in conquering Canada, as well as prolonged conflict where after several years Wellington’s Invincibles strip away the Louisiana Purchase and some territories London ceded to the Americans in 1783.

Finally, alternative history also calls for looking at less plausible outcomes.  What if, London and Washington avoided going to War in 1812 by pursuing British overtures after the assassination of Spencer Perceval or even earlier by ratifying the Monroe-Pinkney Treaty of 1806?  What would the United States look like had the war been avoided and Andrew Jackson not risen to prominence?  Conversely, what if the War of 1812 had led to a direr predicament for the United States by triggering the worst aspects of democracy and military dictatorship feared by the classically minded Founding Fathers?

Of course, the utility of such excursions is not to “prove” that any or all of these alternative histories could have occurred.  As David Hackett Fischer noted: “There is nothing necessarily fallacious in fictional constructs, as long as they are properly recognized for what they are and are clearly distinguished from empirical problems . . . Fictional questions can also be heuristically useful to historians, somewhat in the manner of metaphors and analogies, for the ideas and inferences which they help to suggest.”  In this sense, alternative history can help us better appreciate what happened in the War of 1812 and why, as well as appreciate the implications that conflict had for the future of North America.

Moreover, alternative histories can help us think beyond the two established narratives of the War of 1812.  The first is Mr. Madison’s War, a tale of military ineptitude.  The second is The Second War for Independence, a sequel to 1776 featuring Andrew Jackson as a second George Washington.  Subjecting these narratives to the “stress tests” of alternative (and comparative) histories would help us better understand this war following its bicentennial.