The Given Sacrifice by S.M. Stirling

Rudi Mackenzie has won the battle that expelled the enemy from the new High Kingdom of Montival. Now he must free the people who live in the state once known as Idaho from occupation by the legions of the Church Universal and Triumphant and pursue them to their lair over the mountains. There he will finally confront the forces behind the Church—the Powers of the Void.

Yet even a victory will not end the conflict forever. The Powers of the Void are malevolent and infinitely patient, and the struggle is one that involves the entire world. They threaten Rudi not only in the present, but also in the future represented by his children, Órlaith and John. Rudi knows this.

And as his heir Princess Órlaith grows up in the shadow of her famous father, she also realizes that the enemy will do anything to see that she does not live to fulfill her parents’ dream...

Half a Crown by Jo Walton

For the first time in paperback, the culminating novel of Hugo and Nebula Award-winner Jo Walton's stunning Small Change trilogy.

Following the award-winning Farthing and its sequel Ha'penny, Half a Crown is an amazing alternate-world noir tale of resistance to encroaching fascism, from the author of Among Others.

In 1941 the European war ended in the Farthing Peace, a rapprochement between Britain and Nazi Germany. The balls and banquets of Britain's upper class never faltered, while British ships ferried "undesirables" across the Channel to board the cattle cars headed east.

Peter Carmichael is commander of the Watch, Britain's distinctly British secret police. It's his job to warn the Prime Minister of treason, to arrest plotters, to discover Jews. The midnight knock of a Watchman is the most dreaded sound in the realm.

Now, in 1960, a global peace conference is convening in London, where Britain, Germany, and Japan will oversee the final partition of the world. Hitler is once again on British soil. So is the long-exiled Duke of Windsor—and the rising gangs of "British Power" streetfighters, who consider the Government "soft," may be the former king's bid to stage a coup d'etat.

Amidst all this, two of the most unlikely persons in the realm will join forces to oppose the fascists: a debutante whose greatest worry until now has been where to find the right string of pearls, and the Watch Commander himself.

The League of Extraordinary Gentlemen Omnibus by Alan Moore

At last, the original two LEAGUE OF EXTRAORDINARY GENTLEMEN epics are collected in a single volume!

Then, one month later, the skies over England are filled with flaming rockets as Mars launches the first salvo of an invasion. Only our stalwart adventurers can save mother England and the Earth itself.

Are the past and future immutable or can we escape the inevitable? This thought-provoking collection of time travel stories not only takes us into the past and future, but also explores what might happen if we attempt to manipulate time to our own advantage. Read 25 mindbending stories from Kage Baker, Michael Swanwick, Christopher Priest, Kristine Kathryn Rusch, Robert Silverberg, Paul Levinson and many more!

Lord of Mountains by S.M. Stirling

Rudi Mackenize, now Artos the First, High King of Montival, and his allies have won several key battles against the Church Universal and Triumphant. But still the war rages on, taking countless lives, ravaging the land once known as the United States of America. Artos and his Queen, Mathilda, must unite the realms into a single kingdom to ensure a lasting peace.

If the leaders of the Changed world are to accept Artos as their ruler, he will need to undertake a quest to the Lake at the Heart of the Mountains, and take part in a crowning ceremony—a ceremony binding him to his people, his ancestors, and his land.

Then, once he has secured his place and allegiances, Artos can go forward, and lead his forces to the heart of the enemy’s territory...

Two men, a bitter rivalry, and a quarter-century of unspeakable horrors. Herbert West’s crimes against nature are well-known to those familiar with the darkest secrets of science and resurrection. Obsessed with finding a cure for mankind’s oldest malady, death itself, he has experimented upon the living and dead, leaving behind a trail of monsters, mayhem, and madness. But the story of his greatest rival has never been told — until now. Dr. Stuart Hartwell, a colleague and contemporary of West, sets out to destroy him by uncovering the secrets of his terrible experiments, only to become what he initially despised: a reanimator of the dead. For more than twenty years, the two scientists race each other to master the mysteries of life . . . and unlife. From the grisly battlefields of the Great War to the haunted coasts of Dunwich and Innsmouth, from the halls of fabled Miskatonic University to the sinking of the Titanic, their unholy quests leave their mark upon the world — and create monsters of them both.

The Windsor Faction by D.J. Taylor 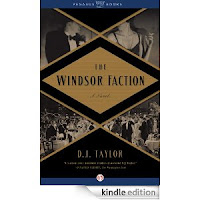 If Wallis Simpson had not died on the operating table in December 1936, Edward VIII would not have been King of England three years later. He would have abdicated for “the woman he loves,” but now, the throne beckons. If Henry Bannister’s car had not careered off the Colombo back-road in the summer before the war, Cynthia Kirkpatrick would never have found out about The Faction.

It is autumn 1939, and everything in history is just as it was. Except, that is, for the identity of the man in Buckingham Palace and the existence of a secret organization operating at the highest levels of society and determined to derail the war effort against Nazi Germany.

From the staff of the newly founded literary magazine, Duration, hunkered down in their Bloomsbury square, and the country house parties full of renegade Tory MPs, to Tyler Kent, the Embassy cipher clerk with his sheaf of stolen presidential telegrams, the journalist Beverley Nichols deviously at work on an alternative King’s Speech, while a Lancashire lad named Rodney nervously runs errands from his Maida Vale antiques shop to the House of Commons.

The Windsor Faction is an ingenious exercise in might-have-been, which assembles a cast of real and imaginary people in a horrifyingly plausible reinvention of history.