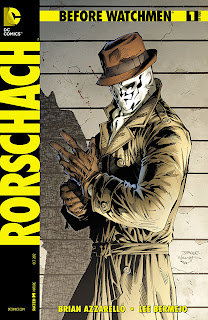 Of all the characters introduced by Watchmen, perhaps the breakway character from both the original series and the film adaptation was the inkblot-masked nihilist Rorshach. Gruff-voiced and notable for his objectivist worldview and moral absolutism, he was the one masked vigilante to both refuse to cease fighting crime following the Keene Act as well as to refuse to stay silent in Ozymandias’ role in the attack on New York, refusing to compromise his principles, even if it cost him his life. Between his brutal war on crime, his brooding quotes and his refusal to compromise what he sees as right, he’s arguably the closest thing Watchmen had to a protagonist, and is inarguably one of the highlights of the work.

So needless to say, the Before Watchmen title following Rorschach had a high standard to strive for, especially since he’s one of the relatively few members of the original Watchmen series to have his backstory explored, having been an orphan driven to become a vigilante following the Kitty Genovese incident, one driven to further and further brutalities by the cruelties of the criminal element. So it’s both somewhat expected, and very disappointing that the title does very little to develop the character further, and by and large is bland to the point of needlessness.

The story follows Rorschach as he both targets the latest underworld Kingpin in New York, the Bard, and becomes a target of the same psychopathic kingpin himself. All the while, his alter ego, Walter Kovacs, makes small talk and comes close to forming a relationship with a woman at a diner he frequents.

The story certainly had potential, and you can see it on page from the various intertwining subplots of the series. You could have explored the idea that Rorschach’s increasingly brutal war on crime is one reason why the criminals are becoming increasingly brutal, and the villain known as the Bard plays with this somewhat. You could have seen Rorschach, well-known for his laser-like focus on warring on societies criminal underbelly, tempted to give it up for a normal life with the girl from the dinner. The problem is, these and some of the other ideas you see throughout the story are both presented half-baked and half-finished, ultimately resulting in a story that fails to touch on much of anything, and adds and changes nothing to the ultimately bland plot, especially given the rushed and abrupt ending forced on the comic.

I will say on the plus side, the grim artwork is fantastic and on occasion a joy to look at, and there are a few notable momentary shout-outs in the series – the most notable being when a wounded Rorschach hitches a ride in a taxi and shares a moment with the sympathetic cab driver, whom is revealed to be Travis Bickle.

Ultimately, little touches like that don’t change the ultimate truth about the title, that were it not for Rorschach’s name at the top, this feels like it could have been a comic about anyone – there’s nothing that really ties it to either the Watchmen universe or Rorschach’s character, and it does nothing to develop either of them. Worse, is that, while not terrible per say, there’s very little in the title to give you a reason to read it anyway – the plot is fairly middle of the road at best, and at worst, is often boring.

While not the worst of the Before Watchmen titles, it is on the lower end, and there is nothing really for me to recommend for you to do much other than pass over it. It plays it too safe and presents little reason on its own to even warrant a look.

Never compromise, even in the face of Armageddon. I just wish someone had told Brian Azzarello.