Beyond Dinocalypse by Chuck Wendig

Thrown through time and space, Jet Black and his friends find themselves in a future that has changed everything they've ever known. Hunted, exhausted, and desperate to return home, they must stay one step ahead of the conquering psychosaurs who have taken over the world and enslaved humanity! But as the world changed, so did the people they left behind. Bitter enemies turn into vital allies and old friends sacrifice their ideals to seek victory by any means necessary in this fast-paced sequel to Dinocalypse Now! 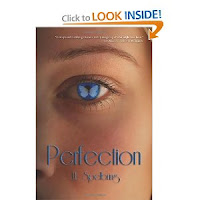 The personification of Aryan purity, Ellyssa's spent her whole life under her creator's strict training and guidance; her purpose is to eradicate inferior beings. She was genetically engineered to be the perfect soldier: strong, intelligent, unemotional, and telepathic.

Ellyssa feels emotions--a fact she's spent her life concealing. Until she encounters the epitome of inferiority: a dark-haired boy raised among renegades hiding since the Nazis won the war a century ago. He speaks to her telepathically, pushing thoughts into her mind, despite the impossibility of such a substandard person having psychic abilities.

His unspoken words and visions of a place she's never visited make Ellyssa question her creator. Confused and afraid her secret will be discovered, Ellyssa runs away, embarking on a journey where she discovers there is more to her than perfection.