Giveaway: The Place of Dead Kings by Geoffrey Wilson 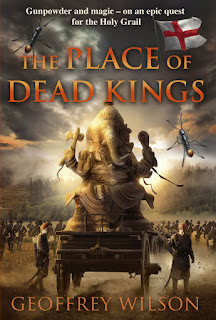 I am pleased to announce for our two year anniversary a book giveaway of The Place of Dead Kings by Geoffrey Wilson. Sequel to a  Land of Hope and Glory, the series is set in a world where the Indian Mutiny takes place in a very different England, where magic is a weapon controlled by her foreign oppressors and one man must risk everything to save his people.

Publishers Weekly called the first novel an "impressive debut [that] fuses fantasy with alternate history, reversing the British Empire's conquest of India. Wilson's version of 19th-century England has been invaded and conquered by the Indian empire of Rajthana, which rules all of Europe with vast armies and a magical source known as sattva...The mix of Arthurian legend and Hindu mysticism make this breakneck-paced adventure a rich and engaging read.”

Check out the description of Dead Kings I got from the publisher:

I posted a review over on Amazing Stories if you want to check it out. If you want to try an win the book, email me at ahwupdate at gmail dot com with "The Place of Dead Kings Contest" in the subject line along with your address. Geoff is giving away two copies to anywhere in the world. All entries must be submitted by the 27th. The two winners will be chosen at random by me.