I now present my first interview with one of my fellow authors featured in Once Upon a Clockwork Tale. His name is Robin Dunn and lets all welcome him to The Update: 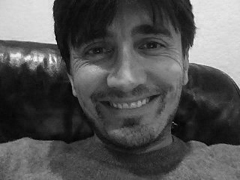 My parents met at Teton National Park where they were summer employees in the 70s, and Wyoming was where I was born, the state that is still the least populous in the nation. Since then I have had about 35 addresses all told, and have lived among other places in Texas, New York, England and California. Though I've written since I was a kid, I started in earnest in 2010.

Why all the travelling?

My parents were divorced when I was five, which accounts for most of the traveling.

What is "Hands and Grater" about?

It's a version of the 'Hans and Gretel' tale, where they live with the wicked witch, and she's a robot.

I like turning traditional tales on their heads, and finding new angles - making the heroes the villains, and vice versa.

At the risk of seeming entirely unprofessional, I did next to zero research for this one. Although I did look up the etymology of 'Gretel' which means 'pearl,' which figures in the story.

As of this writing, I am at 81k words of a 100k word fantasy novel about a hero of the Ingaevones, Hrothbert, on a planet like Earth. He is a former priest and outcast who must fight his way down beneath the earth to try to earn his way back into his tribe. It's rather a mix of fantasy of experimental literary fiction tropes.

Duotrope, a market listing for writers.

Peace by Gene Wolfe. It is very good, also sort of a mix of genre and literary fiction.

Write, write, write! Trust yourself. Music helps me write, too.
Posted by Mitro at 11:00 AM

Email ThisBlogThis!Share to TwitterShare to FacebookShare to Pinterest
Labels: Echelon Press, Hands and Grater, Interview, Once Upon a Clockwork Tale, Robin Dunn, Steampunk