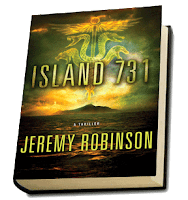 Mark Hawkins, former park ranger and expert tracker, is out of his element, working on board the Magellan, a research vessel studying the Great Pacific Garbage Patch. But his work is interrupted when, surrounded by thirty miles of refuse,  the ship and its high tech systems are plagued by a series of strange malfunctions and the crew is battered by a raging storm.

1636: The Kremlin Games by Eric Flint

A New York Times bestseller in hardcover.  A new addition to the multiple New York Times best-selling Ring of Fire series,. After carving a place for itself in war-torn 17th century Europe, the modern town of Grantville, West Virginia continues its quest for survival. A Grantville resident helps Russia modernize, but he in turn must deal with 1600s Russian culture, politics, and women–or wind up dead.

#14 in the multiply bestselling Ring of Fire Series.

1636. Grantville has bounced back and established its new mission and identity, but it seems some have been left behind—people like Bernie Zeppi, courageous in the battle, but unable to figure out what to do with himself in a world that’s utterly changed. Then Russian emissary Vladimir Gorchacov arrives in Grantville and hires Bernie to journey to Moscow and bring the future to a Russia mired in slavish serfdom and byzantine imperial plots. Bernie jumps at the chance. He figures it to be an easy gig, complete with high pay and hot-and-cold running women.

But one thing Bernie hasn’t counted on is the chance to find his purpose in Mother Russia, from fighting the needless death of children from typhoid to building the first dirigible in Russian history. And then there’s love. Just as Bernie realizes his feeling for a certain Russian noblewoman may have gone way beyond respect, he finds them both enmeshed in the deadly politics of Kremlin power struggles.

War with Poland is afoot and Russia itself is about to get a revolution from within–three centuries early. Bernie Zeppi, former Grantville auto mechanic, is going to have the chance to prove he’s not the loser he believed himself to be. For now Bernie’s task is to save the woman he loves and the country he has come to call his own from collapse into a new Dark Age.

The Age Atomic by Adam Christopher

The Empire State is dying. The Fissure connecting the pocket universe to New York has vanished, plunging the city into a deep freeze and the populace are demanding a return to Prohibition and rationing as energy supplies dwindle.

The Good the Bad and the Infernal by Guy Adams

The Scourge by Roberto Calas

God has forsaken this land.

A mysterious plague descends upon 14th century England, ravaging the country and trapping the souls of the afflicted in eternal madness. The feudal hierarchy--and even the church itself-- slowly crumbles as the dead rise to feed and the living seek whatever shelter they can. The bishops of England call for calm and obedience, but one man isn’t listening.

Sir Edward of Bodiam has been separated from the woman he loves and nothing on heaven or earth can stop him from seeking her out.

Edward and two of his knights travel through the swiftly changing landscape of England, a countryside now overrun by the minions of hell. The knights encounter madness, violence, and sorrow, but Edward fights his way ever deeper into the thickening darkness of unholy terror.

Roberto Calas brings you along on a dark, historical tale full of love, death, and black humor. Follow Edward as he journeys to save his wife, his kingdom, and his very soul.

Indebted to the wrong people, with his life on the line, veteran of the U.S. Cavalry and now hired gun, Booker DeWitt has only one opportunity to wipe his slate clean. He must rescue Elizabeth, a mysterious girl imprisoned since childhood and locked up in the flying city of Columbia.