Congrats to Chris Nuttall for getting fourth place in the Self-Published Author Awards at Underground Book Reviews. I hope you guys have been enjoying Chris' recent articles (How to Write and Publish a Novel in Eight Easy Steps and Review: The Kildaran by Adam Gaffen and Richard Evans). Both are producing excellent numbers, especially from the Reddit community. Thanks guys and remember feedback is appreciated.

Don't forget about our theme for January: "No Americans". We have already gotten a couple of articles and I am really looking forward to sharing it with you guys. Voting continues in our Facebook group for February's theme, so go check it out.

Welcome to our first reader from Bermuda. I hope you and everyone else enjoys what we got coming this week. AJ will be reviewing By Force of Arms and I will be publishing a showcase on A Crack at Draka.

First Novels Based Upon the Iron Kingdoms Role Playing Game 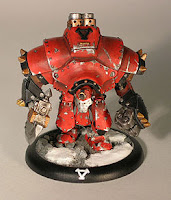 Pyr, an imprint of Prometheus Books, and Privateer Press, the second-largest miniature games manufacturer in the world, have partnered to publish the first novels based upon the award-winning Warmachine steam-powered fantasy wargame and the world of the Iron Kingdoms Role Playing Game.

The Iron Kingdoms world takes classic fantasy concepts and gives them a new twist with a high-octane rush of steam power and industrial engineering. These tie-in novels will be action-packed, steam-tech, military fantasies that combine elements of epic wartime adventure with thrilling cloak-and-dagger espionage.

The first book is titled In Thunder Forged (Book one in The Fall of Llael series) and will be published in June 2013 in paperback and ebook editions. Author Ari Marmell has authored RPG materials for games such as Dungeons & Dragons and the World of Darkness line. He is also the author of the novel The Goblin Corps, as well as Thief’s Covenant and False Covenant in the Widdershins Adventures series for Young Adult readers.

In July 2013, Big Iron (Book two in The Fall of Llael series) will follow. Author C. A. Suleiman has contributed scores of books to the hobby games industry’s top properties, including Dungeons & Dragons and the World of Darkness. He is the developer for White Wolf’s Mummy line, the creator of the Hamunaptra setting, and the coauthor of Vampire: The Requiem.

Pyr’s editorial director, Lou Anders, says, “I am extremely excited by this partnership with Privateer Press. Their reputation for excellence in the game industry matches our own reputation for quality fiction, while the unique ‘steam-powered fantasy’ setting of their Warmachine and Iron Kingdoms games pushed all my personal-narrative buttons. The Fall of Llael trilogy is everything an Iron Kingdoms fan could want, as well as a great introduction to the world for fantasy readers looking for new lands and new adventures.”

It has been a good couple of days for author Guy Saville. His debut novel The Afrika Reich has been getting some good reviews on the Internet. The novel got a review on Publisher's Weekly where the reviewer said "Saville gets everything right—providing suspenseful action sequences, logical but enthralling plot twists, a fully thought through imaginary world, and characters with depth." On top of that Sam North at Hack Writers reviewed The Afrika Reich alongside C.J. Sansom's Dominion, another WWII alternate history. Sam finished reviewing both novels by saying "[i]f I had to choose then The Afrika Reich is a faster read but both will leave a nasty taste in your mouth for a reality that very nearly happened."

If you want to learn more about The Afrika Reich, check out Seb's review of the novel and my interview with Guy Saville.

Aspiring authors take note: there are even more chances to get your alternate history story published.

Those who like to dabble in a little horror should check out the Horrific History anthology which will be closed for submissions on Dec 31st. Comet Press is also accepting novella length stories for their e-book line. Submissions should be between 15,000-40,000 words and should be horror, dark crime, fantasy or dark erotica.

For those of you who don't want to get to dark, Sword and Laser announced an upcoming anthology. Submissions should be 1500-7500 words, but don't send anything yet. They just made the announcement. Bloggers, meanwhile, should check out the upcoming Speculative Fiction 2012: The Best Online Reviews, Essays and Commentary. They are looking for some of the best online commentary and reviews. I plan to submit a few of my articles from Alternate History Weekly Update.

Don't ignore some of the bigger publications when trying to publish your short story. Mark Lord has pointed out that the big names in SF and Fantasy are raising their pay rates. Speaking of Mark, he continues to share his thoughts and advice on self-publishing. Check out his recent article on distribution.

The Friday Society by Adrienne Kress
Three young women's lives become inexorably intertwined after a chance meeting at a ball that ends with the discovery of a murdered mystery man.

Bogart '48 by John Stanley
Someone is planning to blow up the theater during the 1948 Academy Awards show and when Humphrey Bogart hears about it, he knows he has to do something about it. It's what Sam Spade would do.

Long Walk to the Sun by William Peter Grasso
In this alternate history adventure set in WW2’s early days, a crippled US military struggles to defend vulnerable Australia against the unstoppable Japanese forces. Check out our review of William's other novel East Wind Returns.

Alternate Timelines: What if Spielberg Directed Bond and Never Made Indiana Jones? by Ryan Britt at Tor.com.

Green Alternate History: What if Hemp Had Never Been Outlawed? by Nan Fischer at Green Blog.

There’s a Little Real History in my Alternate History #3 by M. Fenn.

Why Defining Steampunk Is Worthwhile by Austin Sirkin at Wonder How To.

Lest Our Passage Be Forgotten & Other Stories Kickstarter by Bradley P. Beaulieu (thanks to Staffer's Book Review for recommending this).

Most-Reviewed Story So Far: "The Beast of the Bosporus" by Matthew Quinn at The World According to Quinn.

Review of Land of Hope and Glory by Geoffrey Wilson at SF Signal.

Review of Osama by Lavie Tidhar at Thinking about books.

Review of A Red Sun Also Rises by Mark Hodder at Thinking about books.

Review of The Strange Affair of Spring Heeled Jack by Mark Hodder at Travels Through Iest.

Steampunk Books Coming Out in December 2012 at Steampunk.com.

Crowdfunding for a German Steampunk Project by ediFanoB at Edi's Book Lighthouse.

Treat Yourself (Or Someone Else) to Some Steampunk Music This Holiday Season! by Austin Sirkin at Wonder How To.

Review: A steampunk 'Nutcracker' adds a nice twist at The Wall Street Journal.

Protecting Project Pulp No. 21: Cyril Plunkett's The X-Gas at District of Wonders.

Review of Elementary Season 1, Episode 9 at Thinking about books.

'Revolution' 2013: The First Season Of NBC's Drama So Far, In 5 Minutes, Before Its Return by Maggie Furlong at The Huffington Post.