Review: Star Trek: The Next Generation/Doctor Who: Assimilation 2 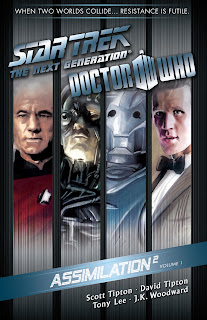 The concept of a crossover between radically different universes is a tricky one to make work, although countless fan-fiction writers have tried.  As I see it, the problem is that the two universes may be very different technologically – say, Babylon 5 and Star Trek – or that there are political differences between them that make relationships between them difficult to handle.  Would the Culture be able to cope with encountering the Galactic Patrol?  How would BSG ‘s society handle an introduction to the Earth Alliance?

Star Trek: The Next Generation is my favourite Star Trek.  Certainly, it has its fair share of crappy episodes, but I feel that it showcases the promise of humanity.  Captain Picard is a deeply humane man, maybe the only Star Trek Captain who can say that.  (No wonder Q is so fascinated with him.)  And Doctor Who is my favourite television show, full stop.  An encounter between the two universes would be either great or disastrous.

Captain Picard believes strongly in the Prime Directive – thou shall not interfere in developing cultures; the Doctor has no regard for any such law (which was at least partly why his own people considered him a criminal, before they died in the Time War).  Now, I have little regard for the concept myself – one of the reasons I like the Doctor is that he plunges into the fray without worrying about the legal aspects – and I think that this is the flaw in Picard’s armour.  If the two of them met, sparks would fly.

The writer, however, decided to focus on an alliance between the Borg and the Cybermen.  That is actually a little piece of fridge brilliance; the Cybermen effectively inspired the Borg, although the process for converting humans into Cybermen is rather more cumbersome than the Borg nanites.  As the story opens, the alliance is descending on Federation planets, suggesting a formidable new enemy.  The two sets of television heroes are forced to combine to fight the bad guys.

One problem starts almost at once.  The first two issues focus more on the separate teams, rather than on the actual alliance.  There are some nice moments here, including a handful of references that might slip past the casual readers.  The STING backstory, in particular, deals with an ethically-questionable deal with an alien race, a deal that is quite like many of the other deals made by humanity in the Doctor’s universe.  But there are also some nice moments of humour as the two teams meet.

Watching these characters interact is fun, although I think that the writer missed some interesting possibilities.  (For example, wouldn't anyone think of Q when they thought of the Doctor? (Doctor Q?))  In many ways, the STING crew come off as bland when compared to the Doctor, Amy and Rory.  On the other hand, the encounter between Guinin and the Doctor is hilarious; they’re both time-sensitive entities and they know when someone has been messing with time.  There’s also a brief cameo of the Fourth Doctor as he meets Captain Kirk and solves another Cybermen-related problem for them.

Overall, this idea worked better than I had expected.  Most of the characters are very true to themselves, including Picard’s refusal to even consider helping the Borg (at least at first) and the Doctor’s sheer grinning zest for life.  The artwork verges backwards and forwards, but on the whole it is quite good.  And someone has been considering the implications of having a TARDIS.  Faced with the need to recover elements of the Borg command network, the Doctor travels back in time to the Battle of Wolf 359, where Captain Picard, having been converted into a Borg, led the Borg in an invasion of the Federation.  The Doctor’s inability to do anything about the battle, calling it a fixed point in time, is better expressed by the artwork.  The regret on his face is very clear.

Mind you, there are also some glitches.  As I mentioned above, Captain Picard’s fixation on the Prime Directive should have made for some drama.  We did get his reluctance to help the Borg, but it isn't quite the same.  I also have some difficulty believing that the Cybermen would be able to overcome the Borg.  They are better at dying <evil grin>.  There’s also the fact that the story spends too much time on exposition – no one reading this comic needs to know about the Battle of Wolf 359.

A more personal issue is that the universes are apparently combining, rather than having the STING future be that of Doctor Who.  It would be nice to think that the idyllic future of STING was at least partly due to the Doctor’s meddling in human affairs.

Overall, I enjoyed the crossover.  Roll on the next one.