A new week means more alternate history news, but first, let's get through some business.

I am changing my policy on "breaking news". While I will still write posts on major stories, more often than not I will just post a link through Facebook (group and page) or Twitter. I know our readers who follow us in other ways won't be happy with this, but I just do not have the time during the day to write as often as I did during the summer, even for breaking news. So follow us on Facebook or Twitter if you up to the moment breaking news on the important events of the genre.

I'm glad we had so many participants in our recent poll, but there are still a few hours left to vote. BTW, why wouldn't you read self-published alternate history? I know there are some turds out there, but there are some diamonds in the rough. AH Weekly Update is dedicated to finding those diamonds for you, so check out our reviews of indie AH works.

We got our first reader from Ghana. Welcome! I hope you and all of our readers enjoy this week's slate of book reviews. Also check out the list of stories for The Masquerade Crew's time travel anthology. Review team member AJ Nolte and yours truly are on it. 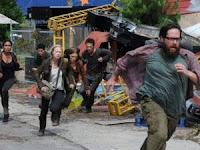 It's the TV show we love to hate, Revolution, and we are going to be hating it for a long time because a whole season was ordered despite a steady drop in ratings after each episode. Even with declining ratings the show continues to get mixed reviews which can be summed up by Mark Wilson: "Its press is divided between those who say it has the potential to become really good someday, and those who moan that an exciting premise has been squandered on the tiresome reversion to telegenic stars sketching out underwritten characters."

Speaking of press, episode 4 got 3 1/2 out of 5 stars from SFX, but Charlie Jane Anders at io9 was disappointed: "So all in all... this episode of Revolution wasn't really in the same league as last week's." Shoshana Kessock at Tor.com also wrote a detailed review of the episode where she said "[f]or a pivotal episode, a lot of things didn't work this week."

Revolution will be with us for an entire season, so stay turned to AH Weekly Update for summaries of past episodes. We are looking for a dedicated Revolution reviewer so if you are interested, submit your reviews to ahwupdate at gmail dot com. All contributors will get an opportunity to promote their projects through their articles so I wouldn't pass up this opportunity to get the word out there.

The new steampunk-inspired fantasy game Dishonored was released to the world last week. I could go into detail about the game but I will let the guys at Achievement Hunter break it down for you:

So what do people think of the game? StickSkills.com gave the game 8.3 out of 10 stars. Gerald Lynch at Tech Digest said "Dishonored ticks every box a great game should." Greg Prince at The Examiner said Dishonored "lives up to the hype, and it's a beacon for innovative design in the gaming industry." Kyle Orland at Opposable Thumbs titled his review "Dishonored is stealthy, steampunk world-building done right", while Oliver Franklin at GQ titled his "Dishonored is the game aspiring steampunk ninjas have been waiting for."

Bloody Disgusting, however, gets my nod as the most entertaining review with the line: "If revenge is a dish best served cold, I’m eating frozen meals from now on, because this is delicious."

Well...I guess I will have to buy this game. I don't usually go in for stealthy games (I like big and loud guns with a lot of cannon fodder to aim at), but I may have to make an exception based on all of these reviews I am reading.

More on The Martian War and Clockwork Angels

Last Friday I reviewed The Martian War by Kevin J. Anderson, but I was not the only one to provide my two cents on the novel. Jen at Fantasy Matters said "Anderson...captures the science fiction mindset of the late nineteenth century.  If the reader can go back into this historical context, then he or she is in for a Martian treat." Alternate historians should have no problem with that, but if you need more convincing check out this interview with Anderson at Impedimenta where he discusses writing The Martian War.

Anderson, of course, has been busy these last few months. His novel Clockwork Angels, a collaboration between Rush drummer and lyricist Neil Peart, is out. Check out another interview with Anderson about that novel at Female First.

No submissions wanted this week, but here are some things to do to keep you busy:

Oct 20: Steampunk workshop at the library in Concord, NH.

I am thinking of creating a calender for all of the things to do and submissions wanted. Stay tuned...

Forget the debate, focus on what came before it by Jennifer Rubin at The Washington Post.

Retromania is the mother of invention by Hannah Wilkinson at Varsity.

The Great Game (The Royal Sorceress 2)–Snippet by Chris Nuttall.

Review of Phoenix Rising by Pip Ballantine and Tee Morris done by David Marshall at Thinking about books.

Review of Tai Chi Zero by David Marshall at Thinking about books.