Short note today because I am a little under the weather. Want to give a shout out to our first reader from Laos. I hope our new friend and all of our readers enjoy our trips down the rabbit hole.

A picture is worth a thousand words: 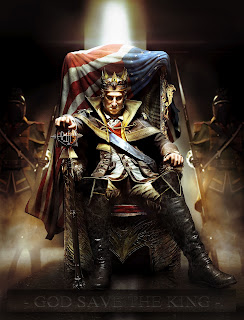 That is the epic promotional art for Assassin's Creed III's new DLC "The Tyranny of King George", an all-new single-player campaign told through three episodic content packs that lets gamers experience an alternate history of the events following the American Revolution. Here is the plot summary from the press release:

As the revolution comes to a close, a new and most unexpected enemy emerges. Driven by the desire to secure the fate of the colonies, the greatest hero of the revolution, George Washington, succumbs to the temptation of infinite power. The new King is born and his reign leaves no one untouched. To return freedom to the land our new hero must dethrone a tyrant he once called friend.

This news came with the announcement that Ubisoft was offering the Assassin's Creed III Season Pass, granting access to all five upcoming downloadable content packs to gamers owning the original game on PlayStation®3 computer entertainment system, Microsoft's Xbox 360® video game and entertainment system, and Windows PC. You can however purchase the DLC without buying the pass.

Alternate historians are already salivating over this new game, but there are plenty of opportunities to play around with history in the Assassin's Creed universe. Although the franchise is a secret history, the ability to play out cloak and dagger scenarios in histories that went differently won't be a difficult transition for Ubisoft. Perhaps you might find yourself fomenting a slave rebelled in Richmond, Virginia, CSA or taking out top Nazi officials in a Berlin where Germany won World War II?

Those interested in learning about other possible American monarchs should check out my counterfactual article on the subject.

If you enjoyed Sean's review on Iron Sky then I highly recommend you check out the Geek Syndicate's coverage on the film. Christi Kassity said the film "has all the necessary elements to become a cult-classic."

But wait, there's more! Geek Syndicate is giving away DVD copies of Iron Sky. All you have to do is send them an email with title of ‘I Want The Iron Sky’  and your name and address to comps at geeksyndicate dot co dot uk by October 31st.  The first 5 entries they pick will each win a DVD. The competition is open to US residents only.

Trying a new format. All submissions below are listed in order of their submission period. Good luck:

Now - Dec 1: Bad Seeds: Evil Progeny. Stories of evil kids, come on we all have a few.

Nov 15 - Dec 31: The Time Traveler’s Almanac. Reprint only, so only famous authors need to apply.

Alternate history at the Historical Novel Society Conference 2012 by Alison Morton at Write a novel? I must be mad!

Alternate Histories: 7 Ways the World Could Be Completely Different at mental_floss.

How Twitter Is Helping Major Brands Gather Steam by Trevor Davis at ClickZ.

Immigration: The Most Important Economic Issue by Brian Doherty at Hit & Run Blog.

Obama was prepared to try bin Laden in court by Jake Tapper at Yahoo.

Professor Elemental Defines Steampunk (or, at Least Tries to) at Tor.com.

Why some technologies fail, and others succeed by Maggie Koerth-Baker at boingboing.

So, I Run Into S.M. Stirling At Powell's Books One Day … by Samuel Klein at The ZehnKatzen Times.

Nisi Shawl’s Everfair: Into the Heart of Steampunk by Cat Rambo at Tor.com.

Review of Bitter Seeds by Ian Tregillis at Fantasy Faction.

Review of Duty: A Retelling of Waterloo by Michael Seeley at The War Blog.

Rockin’ That Steampunk by Kevin J. Anderson at Tor.com.

Steaming Rad: Taichi 0 at Asian One.

Would you kill Baby Hitler? by Roger Ebert at Chicago Sun-Times.

A Brief “History” Lesson by Grant Rodiek at Hyperbole!

Choose Your Own Dishonored Adventure With New Trailer by Sarah Leboeuf at The Escapist.

“Deadlight” Comes to Steam This Month by dwgrampus at Geek Syndicate.

Review: Fortress America done by Blaine Pardoe at Notes From The Bunker.

‘We Never Really Felt The Need For Boss Monsters’ In Dishonored, Designer Says by Jason Schreier at Kotaku.

Sebastian Breit at The Indie Spotlight.