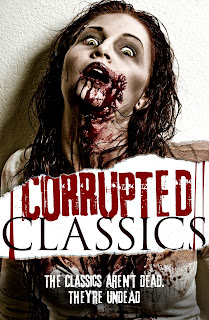 Zombie books these days are a lot like zombies themselves: at first you can just make out a single figure lurching towards you, then suddenly you're confronted by a mob. Most of the time you can easily bypass them and never have to think of them again, but occasionally, one will come along that ends up chewing on your brain....

This collection of short stories follows in the footsteps of Pride and Prejudice and Zombies by taking some favourite classics and zombifying them. Here, we get a taste of what would happen if such well-known figures as Alice in Wonderland (or just "Ali" here), Robin Hood and Peter Pan were to find themselves confronted by the Walking Dead. Shakespeare gets a look-in here too, as do some ancient Greek heroes, with a modern version of the Swiss Family Robinson rounding out the collection.

I say "a taste" here, because unfortunately that's what these stories feel like: a taster menu of what a fuller book would/could contain. The stories are very short, and only three of the six have what could be thought of as a conclusion - the others feel like the first chapter in what should be a longer story. The whole book took only around half an hour to read, and while the stories were well written enough and interesting enough, there's a feeling of disappointment at the end that they couldn't have been "fleshed out" a bit more.

So to go back to my original metaphor, these stories are the zombies that manage to grab hold of your arm (in that you find yourself wondering what happened next after the story stopped), but to be a proper brain-muncher, Corrupted Classics would need to be expanded with maybe more stories, and a fuller treatment on the stories there are.