The Madman Theory by Harvey Simon 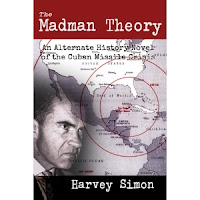 It is 1962 and there are children at play in the White House for the first time since the presidency of William Howard Taft. Richard Nixon, the vigorous 49-year-old president, has been in office less than two years, having won election by a razor-thin margin over Senator John Kennedy. In Moscow, the wildly unpredictable Nikita Khrushchev is looking forward to visiting his cherished revolutionary leader, Fidel Castro. Just 90 miles from American shores, Khrushchev will announce an audacious and dangerous nuclear stunt to abruptly shift the balance of power: a secretly-built network of missiles across Cuba that put American cities in the atomic crosshairs. But President Nixon has his own announcement planned. A U.S. spy plane has discovered the missiles being set up in Cuba and Nixon will soon address the nation to announce his response. Meanwhile, First Lady Pat Nixon is in California to look at a San Clemente house the first couple may purchase. Seeing shoppers crowd around a store-window television, Pat gets her first inkling of trouble. Dick has always insisted she not listen to the news and she is happy, for now, to return to her correspondence. In the coming days, the confrontation between the U.S. and its nuclear foe will escalate. The president will weigh his determination to overthrow Castro against the risk of all-out war as Pat struggles to reconcile her proper role as a wife with her estrangement from the man who thrust her into a public life she despises.

At 5:00 p.m. on September 11, 2001, an ashen-faced but composed President Al Gore stepped into the East Room of the White House to deliver a televised address to the nation. With him were former presidents Clinton and Bush, as well as Texas governor George W. Bush—flown to Washington from Dallas on a military jet, his first visit back to the capital after the close race that lost him the presidency just months before.

That’s not how you remember it?

Imagine if the 2000 presidential election had turned out differently and Al Gore had defeated George W. Bush to become the 43rd president of the United States. How might events have played out? Would Osama bin Laden have loomed as large? Would the 9/11 attacks have been even worse? Would we have invaded Iraq? Would the economy have plunged into recession?

This is the provocative alternate universe of "43*," a riveting thriller by veteran political commentator Jeff Greenfield. Richly reported and anchored in actual events, “43*: When Gore Beat Bush” is the fascinating follow-up to Greenfield’s bestselling “Then Everything Changed,” which imagined what-if scenarios for the Kennedy, Ford, Carter, and Reagan administrations.

Greenfield takes readers deep inside the Gore administration and reveals high-level meetings, top-secret programs, and ego-fueled battles that forever altered the global landscape. And in Greenfield’s hauntingly plausible parallel universe, the law of unintended consequences has a dramatic effect on the fate of the United States.

“It’s the ‘butterfly effect,’” writes Greenfield, “where one dead butterfly millions of years ago leads to a contemporary world immeasurably more coarse, less kind. It’s the notion of the old nursery rhyme: ‘For want of a nail the kingdom was lost.’”

All Timelines Lead to Rome by Dale Cozort

A dead woman’s cell phone chip leads to a mystery spanning the U.S. rustbelt, a surviving Roman empire and a North America without Europeans.

See our preview and review of the novel, plus our earlier interview with Dale.

By Force of Arms by Billy Bennett

North America 1869: It has been six years since the South won the Civil War on the bloody fields of Gettysburg. An icy peace has descended across the continent. In the economically devastated North, war hero William Tecumseh Sherman has just been elected President of the United States. He is determined to pick up where the North left off six years ago, and restore the Union no matter the cost.

Using Confederate and French military involvement in Mexico as a pretext for war, Sherman lights the fuse that once again causes America to explode into the fires of battle. The fragile peace is shattered and armies in blue and gray once again slaughter one another on an epic scale. In the South, the aging Confederate President Robert E Lee once again summons his daring strategic mind, his audacious spirit and his last reserves of strength to once again lead the embattled Confederacy. But the weapons of war have grown evermore terrible. The introduction of breech loading rifles and lethal Gatling Guns has made the battle field deadlier and more horrendous than ever before in history.

By Force of Arms is an epic novel of the Second American Civil War. From Ironclads battling in the Gulf of California to the horrors of trench warfare in Virginia, from black Buffalo soldiers fighting for the Union in the wild west to Confederate partisans in Missouri led by the notorious and daring outlaw Jesse James, By Force of Arms shows the most horrible war in American history through the eyes of those forced to fight it. With the fate of a nation, a continent and ultimately the world itself in the balance, both sides struggle to win the victory by force of arms.

The Eternal Empire by Geoff Fabron

A novel of alternate history, set in a world where the Roman Empire never fell, where the Emperor rules from Constantinople and the Legions still guard the Rhine and Danube. In the early 20th century a network of railways criss-cross the provinces of the Empire and instead of swords and spears the legionaries are equipped with rifles and artillery, the cavalry with armoured vehicles.

In ‘The Eternal Empire’ it is 1920 and the Roman Empire is in a deep economic recession following years of expansion and growth. A package of political, social and economic reforms coupled with austerity measures to deal with the crisis leads to revolts and bloodshed which hands power to a reactionary senator with his own agenda. Protective, punitive tariffs and taxes on trade and transport routes with neighbouring states generate unrest within the Empire and outrage outside it.

As civil war begins to breakout, Saxony, the largest of the German States, sees an opportunity to gain revenge for a humiliating defeat decades before.

Cornelius Petronius, a Roman diplomat in Saxony find himself in the centre of events through his relationship with Katherine, the sister of a Saxon Minister. Tensions between the Empire and Saxony increase as a revolt breaks out in Britain and a war starts with the Arab Caliphate. When evidence of an impending attack across the Rhine frontier by Saxony is discovered by Katherine, Cornelius endeavours to prevent it.