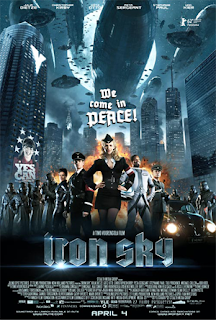 Long ago, I mentioned a Finnish crowd-sourced movie project by the name of Iron Sky. A sci-fi comedy about of all things, Nazi’s that escaped Earth at the end of WWII reinvading Earth in 2018 after forming a society on the dark side of the moon, it piqued my interest at the time for being both an interesting bit of B-movie gold, and an intriguing homage to classic cornball sci-fi. Plus, if you’re anything like me, you can’t help but grin like a maniac at the thought of space zeppelins.

So imagine my surprise when I found out a few months ago that not only had the film been completed, but had been showcased with mostly positive reviews at a number of film festivals. My excitement at finally getting to see Space Nazis in action was stunted by a major problem: despite getting released in Europe, distribution of the film in the English speaking world was an uphill battle, especially in the US, where it only got a number of requested screenings after months of feuding between the fans and filmmakers against the distributor. So, after many moons, I finally managed to snag a ticket to a recent showing, and see if the years of waiting were worth it.

So does Iron Sky live up to its potential or is this a cinematic Barbarossa? Get ready for an invasion my dear readers, as I take aim at Iron Sky.

In 1945, on the eve of losing WWII, Nazi scientists manage to make a major breakthrough in anti-gravity research [Editor's Note: See our review of SecondWorld by Jeremy Robinson for a similar, but more serious use of anti-gravity]. With the discovery too late to turn the tide of the war, it is instead used to evacuate a number of Nazis to the moon, where they build a base in exile, plotting their return to Earth. This comes in 2018, when an American mission to the moon stumbles on the base, forcing them to launch their long plotted Meteorblitzkrieg, with a thinly veiled President Sarah Palin all too happy to fight them, in hopes becoming a war-time President will see her reelected.

The story and script are outlandish, ridiculous, and I wouldn’t have a movie about space Nazis be any other way. As expected, the film is a solid homage/parody of B-movies and Naziploitation films. If you have a sardonic or European sense of humor, or are a fan of B-movies, this film will delight you with its sense of humor. There are a number of jokes in the film that are so audacious they may well get a chuckle from you that the filmmakers had the audacity to make them. This is most notable with the films political satire subplot, which in addition to never being too heavy handed, does touch on a number of issues a Hollywood film would never have the cajones to touch – two in particular involving Nazi-style warmongering and propaganda use by world leaders to retain power. They are also even handed in their skewering, taking aim at any and all targets equally, yet always in the nature of good humor.

At the same time, there is some sold science fiction here – in addition to the alternate history elements, the movie touches on little details like how the Nazi lunar base had to arrange marriages to avoid inbreeding, and how one of the astronauts’ iPhones has more computational power than the entire base – you can tell some serious thought went into the details, and it adds to the film greatly. Though the script could have used some more polish certainly, the result is a gloriously hammy satire that is one part SNL, one part South Park, one part Doctor Strangelove, and I couldn’t help but love it.

A large part of this is thanks to the cast, who are all too happy to patch the cornball premise with some magnificently cheesy performances from all members involved. This ranges from the President of the USA, a Sarah Palin parody that puts Tina Fey to shame, takes a few swipes at Obama as well (his ‘Yes We Can’ posters are skewered in the film), to Gotz Otto as the slimy leader of the Nazi invasion fleet, Commander Klaus Adler. The highlights however are Christopher Kirby, as black Astronaut James Washington, and Udo Kier, whom as Nazi leader Wolfgang Kortzfleisch, steals the scene anytime he’s on screen, and you can tell he had some real fun with his performance.

Worth special note are the special effects, which outclass a number of the summer blockbusters I’ve seen this year (Battleship and Total Recall, I’m looking at you!). Filmed for something in the range of eight million dollars, it’s worth noting that the movie’s visuals are on par with Hollywood films with twenty times the budget. Ranging from the sets the admittedly stunning space battles, largely thanks to some excellent art direction and dedicated cast and development of the film, it is a textbook example that millions of dollars spent of special effects can’t replace putting actual effort into a movie, something the makers of a number of Hollywood blockbusters would do well to learn.

Overall, Iron Sky manages to meet, surpass and fail expectations all at the same time. It is without a doubt, both a far cry from being decent cinema and may well be the guiltiest pleasure to be had at the movies all year. You can tell the movie was a labor of love for all parts involved in its production, one they certainly had a lot of fun with, and you can’t help but join them. Was it worth six years of development? Who can tell, but I enjoyed it, and it is better than a great many bigger movies I’ve seen this year. While it’s not a movie for everyone, if you get a grin at the mention of space Zeppelins, or are looking for a solid B-movie, this movie is worth seeing and I whole heartedly recommend it.

In the end, what is perhaps most notable about the movie however, and what may prove to be its true legacy is that along with movies like Chronicle or WOTW: Goliath, Iron Sky proves there is some serious potential and a bright future in high concept crowd sourced movies. We may well be at the advent of a golden age for independent cinema, and if the battle this movie had with distributors is a sign, that scares the hell out of Hollywood, and it should – Iron Sky is better than about half the movies churned out by Hollywood this year, and had it gotten a wide release, it would have made waves. As far as I’m concerned, it still will – as I said two years ago, lunar Nazis kick the crap out of sparkly vampires, the Navy fighting aliens and half-assed remakes any day of the week.