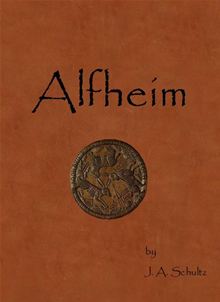 It was a dark time. With the start of the second World War Elven-kind once again found themselves in the middle of a human conflict. With their glory days behind them the Huldufolk must either flee or fight to survive in the clash of nations. But can the elves do more than just survive? Or can Alfheim rise again?

How about history where WW2 happened - and a race of Elves lived in the same world as we did? Sounds interesting, I'd say. Unfortunately, Alfheim is a decidedly weak novel squandering a potentially interesting concept. Be it certain problems with German names - never a good thing if half you story takes place in Germany - or the glaringly obvious fact that the novel did not even receive the most basic editing Alfheim is sadly ripe with problems. Let's not mince words here: Alfheim isn't a good book. I didn't even make it fully through it. What you're getting in this review is just what put me off in the part I did read.

One jarring problem the novel has that jumps right out is its formatting. There are no breaks between paragraphs within a chapter dedicated to different locations and characters. One paragraph may deal with a character in a refugee camp in the USA, the next line will deal with an elf in the woods in Germany. No story will get brownie points from me for having me bash my head against my keyboard in a futile attempt to figure out what's going on! This isn't a small issue: it's damn annoying, and it could've been easily avoided!

If you start a new POV or switch locations hit ENTER twice in your writing program.

Or divide the sections with a set of centered asterisks, like this: * * *

You see, that's really not that hard and is mighty convenient for the people reading your book. Combined with the already existing massive editing problems and other issues of Alfheim this is a game breaker for me.

Secondly: a map of the world as the Elves see it would've been a nice touch to actually make sense of what Alfheim and all the other countries (?) were supposed to be. Because all the human countries are there and apparently evolved just as they did IRL: socially, territorially, technologically.

And yet the Germany Schultz sets his story in is a comparably deserted area filled with houses emptied by Nazis who are about as incompetent as the ones in Hogan's Heroes. There's also absolutely no distinction between the different branches of the German security apparatus he's talking about. They're just Nazis. Don't get me wrong, I'm not bitching about that label. My gripe is that there's zero consistency.

Which is unwittingly amusing once one tries to piece it all together. The guy tasked with rounding up and killing the Elves is obviously part of the SS. The men he uses for his work inside Germany are first described as experienced soldiers, so it's likely they are Waffen-SS. The convoy etc. that are being attacked must be Wehrmacht. And right before he gets the order to round all the Elves up he was contemplating asking to be transferred to Afrika to Rommel... which would mean he's Army? Wouldn't rounding up Elves in Germany be something the Gestapo would preside over while the SA does the legwork? If our Nazi POV could ask to be transferred to Rommel's command, wouldn't that make him Wehrmacht himself? But why would a Wehrmacht officer be tasked with... You see what I mean. If you write alternate history the least I expect of you is that you have an idea about history itself!

Another thing is that it's never explained how exactly the Elves have been able to keep up in that world?! One character mentions early in the story how they were once able to fight the Vikings and the Saxons. Really? The author never describes Elvenkind as a numerous bunch, and he tells us how elves look like: as tall as eight year olds, with sharp teeth and pointy ears. Allow me to point out that - as someone who has worn shield, armor and sword - I will call bullshit on the notion that someone with the body of an eight year old could go mano-a-mano with a Viking raider in full "Hello, I'm here to burn, rape and pillage and not necessarily in that order"-attire.

And they hunt with longbows and rifles. Few grown men can draw a longbow, and firing hunting rifles certainly isn't something optimized for the equivalent of the body of a preteen! And yet somehow they can out of the blue start at guerrilla warfare campaign within Germany in 1941, a densely populated and fully mapped nation crawling with paramilitary and military forces and a massive state security apparatus. They attack convoys and patrols and even bases with ease while the higher ups of the man tasked with "dealing with the vermin" consider them to be no threat. I'm certain open partisan warfare in Germany proper in 1941 wouldn't have bothered anyone in the NSDAP...

It's even more ridiculous that a people as bureaucratically pedantic and scholarly obsessed as the Germans of the 19th and 20th century would know so extremely little about another sapient race living in their very midst. They've got no idea about Elven culture, and only a handful of people know their language (which brings me to the question why all Elves do have the same language?). I could understand this if the setting was the Middle Ages or some other era of the far away past, but this? I mean, you don't think German universities - for a long time considered the best of the world, with German being the language of science in many fields for a time -  wouldn't be all over the pint-sized intelligent species living in their own backyard? You don't think that the Kaiser or the regional rulers before him would've had a census done on them, taxed them, forced them to integrate? If there's one thing you'll never see me doubt it's the pervasive nature of Prussian (and German) bureaucracy!

The biggest - for the narrative's internal sense of weight - is the choice of using the Elves as an armed and dangerous addition to the Jews as a group that's persecuted and being exterminated. For Schultz's Elves make for really bad replacements as his choice shows a distinct lack of understanding for the reasons of the pervasiveness of Nazi antisemitism and its reach on the part of the author. True enough, making the Elves into another persecuted group helps Schultz to set them up as a guerrilla fighting force in Germany and occupied France. But the shoe just doesn't fit.

Jews were highly integrated into society (nearly indistinguishable, really). They made for good scapegoats precisely because their numbers were large enough for them to be considered a known quantity and yet small enough to not pose a problem once persecution started. Base public sentiment could be brought in position against them with coordinated propaganda because an above average number of German Jews inhabited higher socio-economic strata and was therefor susceptible to public jealousy. The Jews playing a large role in the international system of finance and trying to wreck Germany was also an idea touted easily because it was plain and simple for the Reichspropagandaministerium to point to, say, the Rothschild family. Prior prejudices could also be rehashed and exploited: the Jews as cowards sitting at the base while "real Germans" fought in the trenches of WW1, "parliamentarism" (and the leftwing parties with their comparably prominent Jewish-German members) stabbing the Reich in the back and so on... The Jews were a relatable factor. With the "right" propaganda it was possible to get a critical mass of people thinking about them as the enemy in their midst. The Nazis went to great lengths regarding conspiracy theories and (pseudo-) science as to why Jews were a threat.

The Elves don't offer these "convenient" treats. They are loners hiding away in their enclaves, they don't compete for resources, they generally don't interact with human societies. They are not technologically sophisticated, not internationally organized, hell, they don't even speak the language of the country they're living in. They offer very little of the "advantages" of the Jews for propaganda. Most people in 1940s Germany probably would pay them as much heed as an exotic jungle tribe or, indeed, a fairytale.

A skip forward in the book shows the the intervention of the Elves - by the way, why did the USA accept scores of Elvish refugees but historically was a miser when it came to accepting Jewish refugees? - takes WW2 into a vastly different direction, with Elvish nations arising after it concludes. I somehow doubt that comes about more plausibly than what I did read of Alfheim.

Final Verdict: F. Reading Alfheim I'm left with the feeling that J.A. Schultz just doesn't know that much about Germany, the Nazis or WW2 in general except for the more well-known dates. Which is bad if these are the things your story's resting on PLUS Elves! The point is, after slugging through a typo-riddled sixth of the novel and its mushed-together chapters my suspension of disbelief simply said "To hell with this, I'll go play DEFCON".

As someone who has self-published a novel I can only comment that Alfheim is one of the examples that give self-pubbers a bad name. I'm sure Schultz thinks he cares a great deal about the story he's created. But it's obvious that nobody else has proofread this story, and that he did seek little if any input from people who know a bit about WW2 and history surrounding it. And, well, no editing, at all. Had the author given his manuscript these necessary finishing touches I believe Alfheim could have been a passable novel. As it is, all I can credit Schultz for is having a nice idea. That's the only positive thing I can say about Alfheim. Do yourselves a favor and don't buy it.

Sebastian P. Breit is the author of the alternate history novel Wolf Hunt. You can find news, reviews, and commentary on all matters regarding WW2 on his blog, The War Blog, and follow his writing progress on his personal website.
Posted by ahwupdate at 3:00 PM