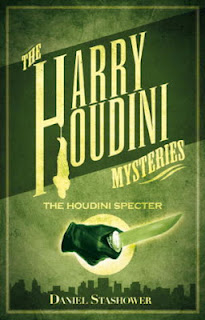 This is not the first Harry Houdini fiction I read.  That honor goes to "Imprisoned With the Pharaohs" by weird fiction author H. P. Lovecraft, which I read last month. The story is allegedly based on a true experience Houdini had in Egypt.  It is unlikely Houdini actually experienced the horrors presented in the story since Lovecraft believed the original story was fabricated and he took significant artistic license.  Nevertheless, Houdini was impressed by the story and continued to offer Lovecraft writing opportunities up until his death in 1926.  I don't believe, however, that Houdini would look kindly on his portrayal by Daniel Stashower in The Houdini Specter, volume three of The Harry Houdini Mysteries.

That is not to say that I did not enjoy the novel.  The Houdini Specter was an intriguing murder mystery in the style of Sherlock Holmes, a style that Stashower is familiar with having written several stories in that universe.  This story is told from the perspective of Houdini's brother Theodore "Dash" Hardeen, a fellow magician who works hard promoting his brother's struggling magic career in turn-of-the-century New York.

When a friend of a friend requests assistance in exposing the tricks of  medium Lucius Craig who is taking advantage of a recently widowed heiress, Houdini jumps at the chance to solve a mystery just like his hero Sherlock Holmes.  They sit in on a seance and witness Craig, while tied to a chair by Houdini himself, conjure a "spirit".  Figuring out how he did that becomes less important than discovering how that apparition was able to stab an audience member, turning their investigation into murder case.

Houdini was certainly an excellent magician and escape artist, and with the help of Stashower's own experience as a magician, shows how common tricks could be used to duplicate alleged paranormal events.  Yet Houdini is a complicated character.  He can be vain, arrogant and fails to understand why no one else can see his greatness.  In many ways he reminded me of Sheldon Cooper from The Big Bang Theory, with his lack of social skills.

He can, however, show compassion for others, keep an open mind on controversial topics and be impressed by those less talented than him.  Nevertheless, he is no Holmes, that honor goes to his brother.  Though history does not remember Dash as they do Houdini, he is the one with the analytically mind necessary to solve a crime.  He is the one who looks for motive, collects evidence and avoids flights of fancy like his brother.

The Houdini Specter was a good page-turning mystery, but the ending could have been better.  Dash ends up captured by the true villain of the story and with our hero in his clutches the murderer...monologues.  He explains in detail how and why he did everything and lets Dash in on the long and drawn out process he will use to kill Dash as well.  The ending makes the villain less a Holmesian antagonist and more a cliche comic book supervillain.  Still the story was good overall and fans of turn-of-the-century tales of ghosts, murder and magic will enjoy Stashower's yarn.