Preview: War of the Worlds: Goliath

For alternate history fans, independent cinema might well be one of the genre's most fertile fields. First, Iron Sky opening to rave reviews in Europe, and with an American release still in the cards, and now a friend of mine pointed out a very interesting looking independent animated film called War of the Worlds: Goliath. 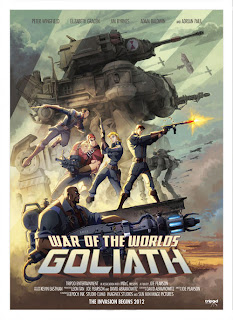 Due out for a hopeful release later this year, the film is an animated follow up to the classic HG Wells story, War of the Worlds, with a healthy dose of steampunk thrown in. Of course, I'm going to let the trailer speak for itself.


The story of the film starts in 1899, in the aftermath of the Martian invasion described in War of the Worlds, with the nations and people of Earth in shock both at being attacked by aliens, and at how we could do little to stop them. In light of that weakness, and not wanting to count on bacteria saving the day twice, the various nations of the world created A.R.E.S., a multinational military force made up of the worlds finest men and women, led by the likes of Theodore Roosevelt, Baron Richthofen and Nickola Tesla, and equipped with reverse engineered Martian tech. The group exists for the sole purpose of providing the first line of defense in the event the Martians return, and when the aliens return in 1914, with a force that makes the one from 15 years prior seem like a minor probe, A.R.E.S will need all the leadership and guns they can get, and above all else, the valor and courage of the warriors fighting for them, hoping to save the Earth from the onslaught of an implacable enemy.

It is a concept that is both brilliant and original, and given that the concept work and screenplay is being handled by David Abramowitz, the man behind both the original V series and the Highlander TV show, and the animation and direction being handled by Joe Pearson, one of the men behind titles like Duck Tales and some of the early Nickelodeon cartoons, promises to have a few surprises. Of course, given the high quality of animation seen in the trailer, both the crisp Japanese style animation and the CGI are some of the most crisp I've seen in a while, and the art direction looks top notch.

As a whole, I really hope this lives up to its large amounts of potential. Animation has a lot more potential than people give it credit for, and even on it's own, this movie looks to be an interesting one. I'll certainly be keeping tabs on it, and if your interested in doing the same, take a look at their sites. If nothing else, it may be the biggest thing to happen with Wells' story since Orson Welles broadcast, and that alone is something to look forward to. 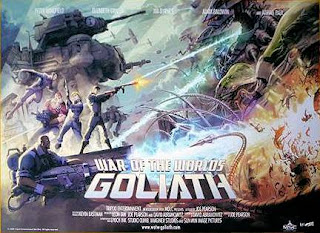 Soldier, scholar, writer and web-voyeur, Sean CW Korsgaard has been active in the alternate history community since 2006, and was recently elected to succeed Mitro as President of the Alternate History Online Facebook group. In addition to his contributions at the Alternate History Weekly Update, he writes for several websites, including his own, which can be found here.
Posted by Korsgaard at 11:07 AM