Review: "I, Putin" by Jennifer Ciotta 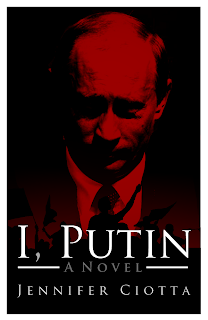 What can be said about the controversial president of Russia, Vladimir Putin?  He has brought considerable economic growth and stability to Russia, but is accused of being undemocratic.  He is a martial arts enthusiast, whose "tough guy" image is dismissed as a publicity stunt.  So what are the real motivations of the three time president of Russia?  Jennifer Ciotta in her novel I, Putin attempts to answer that question.

We get a glimpse of the real Putin thanks to Gosha Golubev, his fictional personal aide. As Putin is re-elected for his third term as president, Gosha struggles to find a real life while dealing with the demands of working for the cold and stoic Putin.  As part of his duties, Gosha has to record Putin as he dictates his memoirs.  From this we learn about Putin humble upbringing.  As a child Putin and his parents shared a one-bedroom apartment with two other families.  Small and bullied at school, Putin gained self-confidence by learning judo and eventually rose through the ranks of the Soviet government as a KGB agent.

The meat of the story, however, focuses on how Putin dealt with the Kursk explosion.  On August 12, 2000, Putin is commemorating the anniversary of his father’s death by journeying to Narva, Estonia to learn about his father's WWII past, something the elder Putin refused to speak of. While there explosions rip through the prized submarine of the Russia navy, the Kursk, killing most of the 118 sailors on board and trapping the survivors underwater.

As the crisis becomes know, Putin returns to Moscow and learns that there is no hope in rescuing the trapped sailors.  Putin refuses to accept international aid for fear of exposing the weakness of the Russian military.  His failure to act cause violent protest that drive him from Moscow and into a secure location near the Estonian border. Putin, however, comes to distrust his bodyguards and believes that a shift of power may be on the horizon in Russia.  Putin now faces a dilemma: does he stay the course and doom Russia to chaos or does he ignore his instincts and accept outside help?

Though more secret history/historical fiction than alternate history, the book was still an enjoyable read.  Ciotta managed to turn Putin into a sympathetic character, something you do not see often in western media.  Other world leaders make cameos in the story.  Russia's first president Boris Yeltsin, who is close to being the comic relief in the novel, was often so intoxicated that Putin and other subordinates were forced to run the country in his stead.  Bill Clinton also makes an appearance and was one of the more compelling characters in the novel.  We get an insight into the former American president's abusive past and how he to came from nothing to become one of the most powerful men in the world.  If Ciotta ever writes another novel like I, Putin, I would love to see her take on Clinton.

I would love to give the novel a higher grade, but at 179 pages, it is a rather short read.  Ciotta often skimmed over parts of Putin's life that could have been given more attention.  Then there is Gosha, who is the source of the information about Putin.  I felt a strong connection to him, but his character was underdeveloped.  Nevertheless, the e-book price is reasonable and I recommend picking up the novel if you want to read a sympathetic tale about Russia's controversial president.