Review: "The Mirage" by Matt Ruff 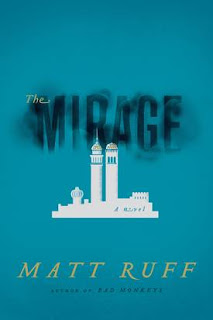 Matt Ruff's The Mirage has the look and feel of an alternate history novel, one that explores current events - specifically, The War on Terror - through the lens of a world that at first glance is very different, and very alternate, from our own.

In both worlds, four planes were hijacked as missiles to be used against their world's dominant superpower, with two hitting twin towers, a third crashing into an important military building and the fourth crashing in a non-urban setting before it could do more damage.

In our world, that power is the United States of America, and 9/11 spawned the war on terror.

In The Mirage, that power is the United Arab States, the only superpower. There, the attacks of 11/9 were engineered by Christian terrorists, and the UAS responded with an invasion of a balkanized America: Denver is occupied, Louisiana liberated from the invading Christian States of America whose capitol, Washington, D.C., is subdivided into a Green Zone and Red Zone patrolled by soldiers of the UAS and its ally, Persia.

The novel starts out with a look back at 11/9, touching on the backstory of one of the main characters: Mustafa, an agent for the UAS' Homeland Security. The novel takes its first major twist when Mustafa is told by a captured suicide bomber that the world they live in is a 'mirage' - that the true reality is reversed: America is the true superpower, while the UAS (which encompasses much of the Middle East and parts of Africa) is split: God is punishing America for its sins, hence the mirage.

Mustafa and his fellow Homeland Security agents - Samir and Amal - soon find themselves searching for the truth behind the mirage, especially after 'artifacts' from the other world start showing up: for example, a post 9/11 edition of The New York Times - a publication explained as having been shut down by the Christian States of America for seditious activities.

As the novel progresses, we get parts of this world's backstory, primarily through entries from its Wikipedia analogue, The Library of Alexandria, and also through comments by the characters interspersed throughout the novel.

We learn that this world has some analogues to important players in our own world's war on terror, including an Iraqi Senator who is a stand-in for Rudy Giuliani. We also discover that some important players in our war on terror exist in The Mirage, with different roles: Saddam Hussein is not the ruler of the nation of Iraq (which in the novel is an UAS state), but the ruler of Baghdad's underworld. Dick Cheney - never referred to by name, always as the 'quail hunter' - is head of the CIA (Christian Intelligence Agency) of the OPEC-member Evangelical Republic of Texas.

And, Osama bin Laden is known as a key UAS Senate leader, and the head of the Senate's Intelligence Committee.

But in the world of The Mirage, even though the setting may be changed, to paraphrase one character, the people are essentially the same: neither Saddam nor bin Laden are among the good guys.

Much of the background of the novel also seems to be a direct, if mirrored, reflection of our world: Arabia (not America) is the land of the free, while America (not the Arab world) is perceived as divided, fundamentalist, housing elements that are a collective threat to democracy. Ruff shows this in detail: for example, besides the Wikipedia-esque Library of Alexandria, we also learn that 24/7 Jihad (24) is a popular TV show, and Green Desert (Green Day) a popular rock band. A popular theme park is Six Flags Hanging Gardens. And that leads to my first major criticism of the novel.

Sometimes, the mirrored reflections work - a reference to a creation science museum in the occupied Smithsonian in D.C. seems realistic, given the background of the CSA in this world and the real-world efforts of some evangelicals to establish the theory of a literal, seven-day creation as scientific. Sometimes, as with the 24/7 Jihad and Green Desert references, they seemed forced - like Ruff was trying too hard to establish the Arabia-as-America analogue.

I do want to compliment Ruff for not going all the way with the Arabia-as-America idea. He does a good job at establishing the characters, and background (in the UAS) as culturally Arabic and Muslim. Turning Arabia into a secularized, advanced democracy clearly hasn't made the people nor society become Americanized Christians with Arab heritage: in many ways, this culture is still Arab, and Muslim, and that comes across very strongly.

Ruff also does a good job of fleshing out his characters, and drawing the readers' interest in them. The heart of the book is what happens to Mustafa, Samir and Amal, and I found myself sticking with their story to the very end, which is where we find out the truth behind the mirage - leading to my second major criticism of the novel.

We find out more of the how behind the truth of the mirage than the why. Without spoiling the end, the why is explained in only a few sentences. Ruff should have spent more time on it, considering how important it is to the entire novel. That's me, though; your mileage may vary.

On another note, again without spoiling the novel: fans of true alternate history will likely find the how of the truth to be very ASBish. Whether it works or not as a plot device is up to the reader to decide.

In the end, I give this a B+. The Mirage is worth your while as a read, as long as you accept an ASBish twist and understand it more as the author's reflections on the war on terror rather than as a strict alternate history.
Posted by ahwupdate at 11:00 AM