Woot!  The first Weekly Update of 2012.  I am looking forward to once again bringing everyone the good news about alternate history until the world ends in December (stupid Mayans).

Got some good things coming up this week.  I will be doing a review of The Five Fists of Science and an introduction to a new recurring segment.  Korsgaard also has a new post in the works and I will also e conducting an interview with Andy Johnson, author of Seelöwe Nord.  I plan to post it no later then next week.  Meanwhile, I am reading Boneshaker by Cherie Priest, so I promise to report back on whether the book lives up to all the hype.

Gorbachev: World Would be a Safer Place with the Soviet Union? 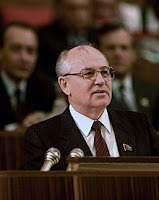 When we look back at the fall of the Soviet Union happening twenty years ago, rarely does anyone look at the end of the Cold War and the collapse of communism as a bad thing.  Yet Mikhail Gorbachev (you heard me right, the Soviet Union's last leader and first constitutional president) disagrees in a counterfactual article he wrote for The Nation and promotes a theory that states that the world would have been a safer (better?) place with the Soviet Union.

Gorbachev begins by refuting that the Cold War ended with the fall of the Soviet Union in 1991.  He instead claims that the Cold War ended two years early at the Malta summit with President Bush, where the two leaders announced they no longer considered their nations enemies.  He also claimed that communism was on its way out in the Soviet Union, with new reforms implementing freedom of speech and a market based economy, and internal changes were only prevented by the August Coup of 1991 and the secret meeting by Yeltsin and other presidents to abolish the union despite the will of the people.

Gorbachev goes on further to suggest that the idea that the United States was the "victor" of the Cold War led to Cold War thinking to continue into the 21st century.  He blames this misguided sense of the West's victory and the belief that militaristic solutions (or might is right) for the violent break-up of Yugoslavia, the war in Afghanistan, the war in Iraq and Iran's determination to gain nuclear weapons.  He also states that the belief that the Western way of business was superior to all other kinds led to the economic crisis that we know as the Great Recession.

In summary, Gorbachev feels the West missed out on a golden opportunity to work with the Soviet Union, to seek out collective solutions to global problems and to make the United Nations a serious force in global peace.  Now these ideas certainly have critics, but even some alternate historians may hesitate to say that Gorbachev is full of hot air.   At the AH Wiki, there is a timeline called New Union, which features a Soviet Union that reformed itself in a way that Gorbachev discussed in his article.  The author of this timeline at one point felt he was turning the world into a utopia as history played out from the August Coup never happening.  What do you think?

The Power List: 23 Movers and Shakers in Science Fiction and Fantasy by Charlie Jane Anders at i09.

Episode Three: The Railroad Underground by Benjamin Jacobson at SteampunX.

Prince Henry of Prussia: The Rise of U-Boat by BlondieBC.