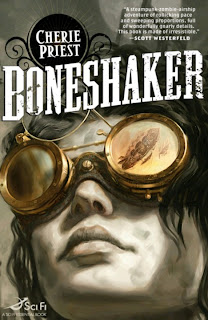 I seem to have a steampunk craving these last couple of weeks.  First The Five Fists of Science and now Boneshaker by Cherie Priest.  I am not saying here is anything wrong about liking steampunk, it brings a lot of good things to the genre.

Since Boneshaker has been getting a lot of press lately, however, I wanted to see if the novels holds up to the hype.  Thankfully, it does.

The story is set in an alternate 1880s Seattle.  Mad scientist Leviticus Blue is blamed for destroying much of the city when his new invention, a mining device known as the "Boneshaker", causes a massive earthquake that expels a gas known as the "Blight".  The gas is incredibly lethal and worse yet, causes the dead to rise and hunger for human flesh (called "Rotters").  The people of Seattle build a wall around downtown Seattle and retreat to the remaining safe portions of the city, called the Outskirts.

Sixteen years later, Zeke Wilkes, Blue's son, goes into the walled city to clear his father's name.  Zeke's mother, Briar Wilkes, follows him in an airship, determined to rescue her son. Inside she finds people who stayed behind after the wall went up.  Most are helpful, but there is also the mysterious Dr. Minnericht, who eerily resembles her dead husband. Zeke and Briar's arrival upsets the status quo and they find themselves caught in a battle between the factions within the wall.

The story is exciting, with mysteries and secrets aplenty, and twist at the end.  Plausibility hounds, however, will cringe at the number of points of divergence.  The earliest POD involves an earlier Klondike Gold Rush that leads to Seattle being a larger city by the time the Boneshaker destroys most of it.  Besides smaller changes to Seattle history to allow for iconic buildings to be included, the American Civil War is also still going on.  There are a lot of PODs involving the war, including a southern transcontinental railroad and Stonewall Jackson having a longer life.

The most perplexing of these PODs, however, is the mention of British troops fighting in the south.  This seems to suggest that Britain has recognized the CSA and is at war with the USA.  Yet all the characters act as if the war is an eastern problem and not something they need to worry about.  Now my geography is a little rusty, but I believe Seattle is pretty damn close to British Columbia.  Did the Canadians decide to sit this one out or what?

I almost forgot: there are zombies.  That is why I can ignore (most of the time) the plausibility issues because the story is what makes this book an excellent read and a good introduction to steampunk if you have not tried that sub-genre yet.