As promised here is the late edition of Weekly Update.  Sorry guys, but with the holidays and all, I have been very busy.  Some of the other contributors may be publishing something this week, but I am not making any promises.  The good news is we got our first readers from Kuwait and Réunion.  Welcome!

Scholastic Books announced a new alternate history/time travel 7-book series called Infinity Ring  for 7-12 year olds. Like the 39 Clues series, Infinity Ring will combine books and an online game that allows kids to go back in time and try to “fix” historical events that have gone wrong. Six different authors will write the series.  James Dashner will write the first book, A Mutiny In Time (to be published in September 2012), and a yet untitled final book.  Other authors include Carrie Ryan, Lisa McMann, Matt de la Peña, Matthew J. Kirby and Jennifer A. Nielsen.  The final book will be published in March 2014.

For information about the plot, here is the press release from Scholastic:


History is broken, and a long-feared Cataclysm seems imminent. The capital of the United States is Boston. Lincoln’s face is nowhere to be seen on Mount Rushmore. Everyone’s buzzing about the French royal wedding. And an international group of men and women known as the SQ is more powerful than kings, richer than nations, and more fearsome than armies. When best friends Dak Smyth and Sera Froste stumble upon the key to time travel – a hand-held device known as the Infinity Ring – they’re swept up in a centuries-long secret war for the fate of mankind. Recruited by the Hystorians, a secret society that dates back to Aristotle, the kids learn that history has gone completely, and disastrously, off-course. Now it’s up to Dak, Sera, and teenage Hystorian-in-training Riq to travel back in time to fix the “Great Breaks”… and to save Dak’s missing parents while they’re at it. First stop: Spain, 1492, where a sailor named Christopher Columbus is about to be thrown overboard in a deadly mutiny!

The online gaming experience, however, is key to this new series.  Each book in the series will be packaged with a unique "Hystorian's Guide," a collectible map that includes a special code to unlock exclusive content on the online game. Readers can go to http://www.infinityring.com/ (site currently under construction) and play as the main characters from the books as they attempt to fix history. The online game, which will be available through most platforms, features a virtual world, where players can interact with other characters, and explore key events in history alongside historical figures.

There are few alternate history books for children currently.  Even Harry Turtledove's Crosstime Traffic series is geared more to young adults.  Whether this new series will be a success, however, remains to be seen.  Still it is good we are starting the kids young on this particular unhealthy obsession! 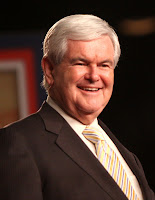 Alternate history author and politician Newt Gingrich continues with his campaign to be the Republican nominee for President of the United States, but things are not going well.  His policy for the courts has been likened to that of fictional President Jake Featherston of the Confederate States of America.  You heard that right, Gingrich has been compared to a Harry Turtledove character that is an analog to Adolf Hitler.  Meanwhile another reviewer has attacked Gingrich's works for being both historically inaccurate and overly pro-Confederate.  Ouch!

Imagining a world without Hanukkah by Lawrence M. Pinsker at Winnipeg Free Press.

The Implications of Less Devastated Empires by Silver Goggles at Steampunk News.

Thoughts on Animating "Coil Gun." by Matthew Quinn at The World According to Quinn.

The Use of Dragons In Warfare - Part One by Luka Novak at AH Fiction.

New Cover for the German Market by Sebastian P. Breit (a.k.a. War Blogger).

Review of the Emberverse series by S. M. Stirling done by Fabulous Realms.
Posted by Mitro at 11:00 AM