Ad Astra Per Aspera (Latin for "through hardships to the stars") by rvbomally is an alternate history timeline can be found at AH.com.  The tag line for this alternate history sums up the general theme of this timeline:

Yes this is a very grimdark dystopia.  The point of divergence of the timeline is the successful impeachment of President Andrew Johnson and the rise of a Radical Republican administration that punishes the southern states for the War on Treason (ATL's American Civil War).  An increasingly militaristic United States transforms itself into the American Empire, dividing the world between itself, Germany and the Soviet Union.  Here is a map of the present day: 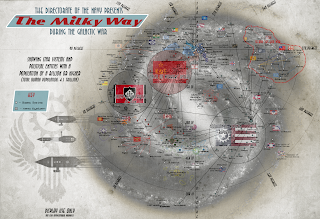 Wait a second...did I accidentally put the wrong map up?  No I did not.  The events of Ad Astra Per Aspera are primarily set in the 28th century (hence its inclusion in the Alien Space Bats forum).  Nevertheless, it is an amazing piece of alternate history.  The three great galactic superpowers (the Coalition of Western Republics, Conseil of Workers’ Systems and the United Technocracies of Man) fight over control of the galaxy, while keeping the lesser human and alien nations in line.

While rvbomally does not always follow real science, he still managed to create a realistic future devoid of most sci-fi cliches.  For example, space battles are nothing like what you see in most science fiction films.  Instead, actual physics forces combatants to take into account a 3D, frictionless environment where enemies could be millions of miles away.  Instead of brave space heroes life Honor Harrington, we have math nerds plugging firing solutions into computers while conferring with aliens who evolved underwater and have experience fighting battles in 3D.  Faster-than-light travel also exists, but instead of "hyperdrives" rvbomally uses actual scientific theories to get around the restrictions on intergalactic travel, like an Alcubierre drive.

There is even a multiverse, but besides "trueline", most timelines are pocket universes (or vacuity pockets) with humanity confined usually to one star system.  All three powers exploit the multiverse, standard practice usually being that you  nuke the world into oblivion after stealing anything of value.  Often these pocket universes are modeled after published or online alternate histories.  I was very entertained when a Draka analogue was destroyed by another group of space fascists.  Nevertheless, there are many dangers located across the multiverse.  Powerful beings roam between the spaces between realities and mankind's doom could be waiting on the next trip into the unknown.  It is not unusual for someone to go mad travelling through the multiverse.

Meanwhile, all three galactic superpowers are all dictatorships whose leaders appear to model their nations on Oceania from 1984.  Dissent is immediately punished by death since human life is worth very little when their trillion more bodies to feed to the fire of war.  In fact rvbomally makes a compelling argument that when considering the size of the galaxy and territory the superpowers (and even minor states) rule, dictatorships may be the only effective means of governing humans, especially when you have to convince them to support wars that may last a century due to the vast distances involved.

The current thread is 95 pages long and is still growing.  Rvbomally has been kind enough to use stories submitted by other users and with an unlimited number of universes to explore, it is unlikely that this story will end anytime soon.
Posted by Mitro at 11:00 AM