I present to you a new column for Alternate History Weekly Update, "Op Ed" with Henry Martin. 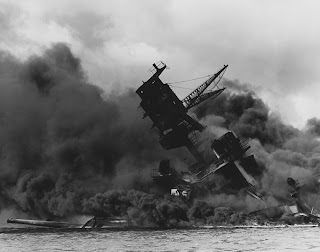 Seventy years ago today the United States declared war on Japan after a devastating surprise attack on Pearl Harbor. However, it was not a total surprise, for US Secretary of War Henry Stimson had discussed with US President Roosevelt concerning the escalation of the war in China and Southeast Asia. It was expected that Japan would attack US fleets and the president and his advisers were considering ways to maneuver Japan into firing the first shot.

Better writers than I have written variations of this, I am sure, but the point of this essay is to demonstrate that we can learn perhaps as much from considering alternatives as we can from actual mistakes. This is a function of the alternative history genre that is not often appreciated.

Knowing what we know today, we can backtrack days or even moments from a disaster such as the one on that Sunday morning in 1941 and consider what 'could have,' indeed maybe what 'should have' been done to prevent what many 'knew' was inevitable. In this case, for example, FDR and his advisers took the chance that Japan did not have the means to strike half an ocean away, and they lost that 'bet.' If however, they had taken different measures, such as I supposed above, the US would have begun the war in the Pacific on a stronger footing.

With a intact fleet on the water and ready for battle, Japan may have opted for a different move, perhaps even agreeing to some concessions in French Indochina as requested in November. The war in Europe would have most likely lead to an eventual declaration of war there anyway, and that would have drawn Japan into the war with the US as well. There are so many different twists and turns to consider that a student of history would have to do some intense research to understand the strengths and weaknesses of various campaigns in Europe in 1942 that may have gone differently if the US FDR had planned his Pacific strategy different.

As one works through all the myriad of changes in an alternate history of this magnitude, he becomes aware of the interactions of things far removed from each other. The butterfly and the domino become players on opposite ends of a long string of possibilities and probabilities. Luck and logic coalesce to activate the imagination to perhaps produce a better decision the next time we are faced with a dilemma.

In honor of the 2466 killed that day (including 64 Japanese warriors), we can imagine 'what if' the US president had not taken the chances that he did in 1941. How many lives would have been saved if the attack on Pearl Harbor had been avoided? Perhaps more people would have died in the long run, but not the same ones. There is no way of knowing. But what we can know is that we, with the gift of hindsight, can learn from both fact and fiction.

Toward a better alternative,