I am starting to lose my faith in television.  I was perusing AH.com when I found this post about an alternate history anime called Strike Witches that was streaming on Netflix.  So I decided to check it out. 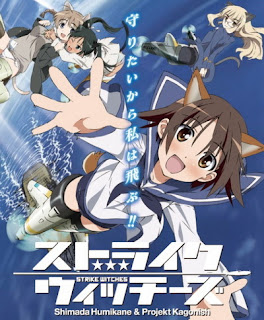 I never got past episode one.

The story is set during the World War II era with rival nations joining forces to confront an overwhelming alien threat together instead of fighting among themselves.  Now if this was an animated version of Turtledove's Worldwar series it might have been a lot more interesting, but that is where the similarities end.  None of the nations's names correspond with the OTL WWII combatants.  In fact the entire world resembles a Central Powers victory timeline. 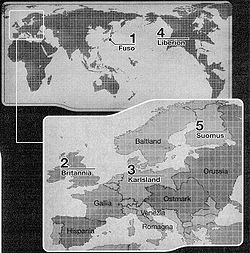 The aliens, meanwhile, are called the Neuroi who almost exclusively use aircraft as weapons.  They also have a weapon that erodes land, causing it to sink into the sea (hence the changes to the map, but I have no idea what is up with North America).

To fight the Neuroi, humans have recruited young girls from several nations to join the 501st Joint Fighter Wing.  The girls are chosen due to their...magical abilities.  Yes magic, because all of these girls are witches (as if this TL was not ASB enough).  The girls' magical abilities are enhanced by wearing special machines on their legs which let them fly (and for some odd reason give them a new set of ears and a tail).  Using these weapons, they take the fight to the Neuroi in the skies.

I have to stress again that the main characters are all girls and not women.  That makes this anime very disturbing...since not one of the young girls are wearing pants.  Seriously, every female character under the age of eighteen was wearing only underwear.  The makers of the anime stressed this fact by focusing several times on these undergarments throughout the show and in one scene we walk into the main character (who could not have been older than twelve) undressing.  I felt really dirty watching episode one, but I still thought I should at least watch the next episode before passing judgment.  During the post-credits montage, however, the makers gave me a close-up of the main character's smiling face...and then gave me close up of her crotch that lasted an uncomfortably long period.

I had enough at that point.  I do not even feel like talking about the other elements of this show, because I do not want to dignify this show by treating it like any other television show.

Its not like I do not enjoy a good anime.  I have the first Robotech series in DVD and have been a fan of the Gundam series.  In fact give me a guy piloting a giant robot and I will probably watch.  Strike Witches, however?  It peeked my interest with the alternate history setting, but horrified me with its pedophilia-like depiction of girls.  Stay away from this anime and if you really are desperate for alternate history television, go watch Sliders it is streaming on Netflix as well.


* * *
Mitro is founder, editor and contributor of Alternate History Weekly Update. When he is not busy writing about his passion for alternate history, he spends his time working as a licensed attorney in the state of Illinois and dreams of being a published author himself one day.
Posted by Mitro at 6:19 AM