Review: "Then Everything Changed" by Jeff Greenfield 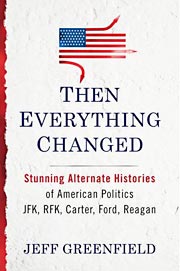 Then I read Then Everything Changed: Stunning Alternate Histories of American Politics JFK, RFK, Cater, Ford, Reagan by Jeff Greenfield.  The book is a collection of three novellas covering American politics from the 1960s to the 1980s.  An Emmy-award winning veteran of politics and news, Greenfield bring his first-hand knowledge of the American political system and supports it with detailed research.

The first novella diverges in 1960 when John F. Kennedy is killed by a suicide bomber days before the Electoral College would have voted to make him president.  After a short constitutional crisis, Lyndon Johnson became president in 1961. The start of his presidency is highlighted by forcing through the Voting Rights Act of 1961, but it is overshadowed by Soviet missiles that are discovered in Cuba.  Johnson's handling of the crisis is vastly different from how JFK did it in OTL, but thankfully I do not have to read When Angels Wept again.

The second novella diverges in 1968 when Robert Kennedy narrowly avoids his assassination by Sirhan Sirhan.  Kennedy's manages to defeat Humphrey for the Democratic nomination and Nixon for the presidency.  LBJ carries out the withdrawal from Vietnam and Nixon helps RFK open China to trade without making the president look like he is being weak toward communism.  Issues arise, however, when a Democratic supporter is caught attempting to steal documents from the Republican election headquarters...

The third and final novella diverges in 1976.  A unique POD for using historical characters that are generally ignored in most ATLs (especially my favorite jurist of all time).  History changes when Gerald Ford corrected himself after misspeaking during a presidential debate against Jimmy Carter.  He goes on to win the Electoral College vote for president, but not the popular vote, and then goes on to serve a full term complete with an economic meltdown and a very different Middle East (Iraq and Iran allied with Israel?).  The 1980 presidential campaign gives us a Ronald Reagan who is unable to run as the candidate for change and the long-shot Gary Hart seeking to overturn Ted Kennedy's presumed coronation as the Democratic nominee.

Greenfield has managed to craft an engaging tale of American politics, especially during a period of time when most Americans would ignore politics to watch Jersey Shore.  More importantly, he managed to capture the American political system, warts and all, without offering any apologies for it.  The idealists and crooks are presented side by side and treated the same by the author.  Then Everything Changed both informs us about the America political system and entertains us by once again proving that plausible, well-researched alternate histories are far superior than the "rule of cool" timelines that dominate the genre.

Is the book without faults?  Of course not.  Greenfield often uses events and people throughout the book to reference OTL political issues that would happen in the future.  At first they are entertaining, but they happen so often and lack any subtlety that the reader sometimes feels that Greenfield is standing behind bringing a hammer down on his head again and again shouting "GET IT!" Greenfield also spends the last 10% of the book discussing the research he did when crafting his alternate history.  The reader is presented with a series of short fact blurbs that interrupt the momentum of the book and could probably be skipped unless you have taken issue with one of Greenfield's assumptions and want to read his argument.  Perhaps Greenfield was simply trying to prevent the inevitable "this is ASB" comment on AH.com, but footnote/endnotes would have been more preferable in my opinion.

I still recommend this book, especially for the message contained in it.  Consider the fact that all three alternate presidents in Then Everything Changed are Democrats, yet they tend to be centrist, appealing to both liberal Republicans and conservative Democrats.  In our polarized society of American politics, where radical groups like the Tea Party and Occupy Wall Street are competing for the attention of the American people, one can wonder whether the ideas of compromise and moderation can make a comeback.

There, now that I have violated my No Cross, No Crown rule, go and read the damn book.

Matt Mitrovich is a long-time fan of alternate history, founder and editor of Alternate History Weekly Update and a volunteer editor for Alt Hist magazine. His fiction can be found at Echelon Press, Jake's Monthly and The Masquerade Crew. When not writing he works as an attorney, enjoys life with his beautiful wife Alana and prepares for the inevitable zombie apocalypse. You can follow him on Facebook or Twitter.
Posted by Mitro at 10:00 AM