In Defense of Forums 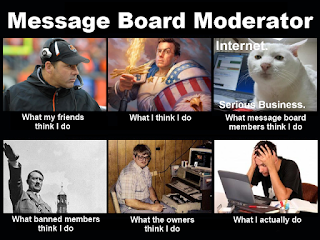 There has been much talk of how the future of the alternate history community on the Internet is gravitating towards formats that are distinct from the traditional forum format. Facebook groups are the new format that many like to point to as the future of the community. I do believe, however, that forums provide a key asset that other such formats, such as Facebook groups or subreddits, simply do not: permanence.

Boards such as AlternateHistory.com or others such as Althistoria, Otherhistory, or Othertimelines bump their threads up to the front of each individual forum when they are commented upon; other formats have no such mechanisms. This is what allows longer works to be able to be sustained, and what allows titans of the genre and the community to thrive. Years of effort can be put into these great works; after all they gave us AlternateHistory.com’s greatest.

You just can’t do the same thing on Facebook or Reddit; threads are vapid, passing things that are quickly cast away in the course of a few days to a few hours. They lack the ability to rocket up to the front page of a forum once new activity has been logged. Reddit technically can but its algorithm makes that a truly titanic effort. Facebook isn’t much better and I am not familiar enough with Tumblr to judge.

In his previous post, "Is the Alternate History Community Over-Centralized?" this site’s esteemed owner Matt Mitrovich speculated that the new generation alternate historians will prefer social media to discussion forums. I can understand this sentiment, but I feel that the two serve different niches, and as such will allow the the propagation of different forms of interaction.

The names of the two genres reveal the distinct differentiation of function. Social media is about people and making connections over shared interests, such as alternate history in our case. Discussion forums, on the other hand, are focused around ideas, around discussion of ideas and not about people. Those involved in the discussion are of secondary importance to the actual ideas. An alternate world is nothing more than a series of ideas presented together in conversation with one another and as such forums provide a natural place for such timelines.

There is another key advantage of forums: they are centralized. The transient nature of social media is not conducive to bringing talent together in a form that can be easily appreciated. The permanence of forums and the ease of discussion as described above are what attracts the good writers who write the masterworks. With masterworks in one place, more people will come and will discuss these bundles of ideas.

Social media, on the other hand, is primary a means of association and those who join said groups are primarily looking for the communal aspect. This is not to say that there is no community on forums or discussion of ideas on social media, far from it. The way to attract people, however, is quite different. Social media emphasizes community, while forums emphasize the content generated and the ideas discussed. They are two different purposes.

Social media and forums are each tailored to their very specific role in the broader community, and each attract people looking for something different. Forums provide a permanence and a format that social media cannot match; as such, forums are going nowhere.

Alexander "SpanishSpy" Wallace is the author of several works of alternate history on alternatehistory.com and the alternate history wikia, including the 2014 Turtledove Award Winner for Best New Speculative, The Rise of the Tri-State World Order: A Timeline of Orwell's 1984, Emancipation and Exodus, and Scorpions in a Bottle, as well as other works.
Posted by Mitro at 11:00 AM