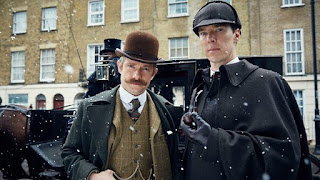 When I heard that Sherlock, the BBC's modern day retelling of Sir Arthur Conan Doyle's famous detective, was going back to the correct era in the new special, "The Abominable Bride", I was pretty excited. When I read the press release I even started to think that they were going to do a double-blind what if episode.

You see in the universe of the show, Sherlock and Watson are real 21st century people, not fictional characters of the Victorian era. In that universe, however, putting them in the 19th century is an alternate history from their perspective, but it is what really happened in our timeline! Of course that is not exactly where they went with the episode. In fact it wasn't even a "special" episode since it tied directly into the plot of the main series.

Enough of the introduction, our story begins in the late 19th century. Watson has returned from Afghanistan recovering from an injury and looking for a place to stay. A friend of his introduces him to a man slapping a corpse, who turns out to be Sherlock and invites him to be his roommate. This entire scene plays out almost exactly like the very first episode of the series and for a moment I thought they were remaking the first episode, but the proper story began shortly thereafter.

Fast forward a few years, Watson is married and writing stories in the Strand about his adventures with Sherlock. Lestrade soon shows up at Baker Street about a disturbing case where a woman, dressed as a bride, goes on a rampage in a street before shooting herself in the head...only to apparently come back to life the next night to kill her husband. Sherlock takes the case, but seems less than interested in solving it. Meanwhile, more murders are attributed to the bride and even Mycroft, Sherlock's brother, warns him of an enemy that is a threat to Britain that they must lose against.  Mycroft then refers the a case to Sherlock. It appears Lady Carmichael's husband, Sir Eustace Carmichael, is being haunted by the bride and Sherlock decides to use him as bait to catch her, but in the end uncovers a vast conspiracy that is responsible for the bride and all of her killings.

So some big spoilers coming your way, so stop reading now if you haven't watched the episode. Anywho, did you remember everything I mentioned above? Its not real. All of the events happening in Victorian England are actually happening inside the real Sherlock's head, who is as high as a kite. He has entered his "mind palace" to solve an older murder mystery in an effort to come up with a plausible reason for why his nemesis, Moriarty, survived his own apparent suicide and yet still returned (in fact, you probably need to watch a few episodes if you haven't already, to understand all of this).

So I can say this episode is certainly not an alternate history. In fact, "The Abominable Bride" was confusing as it was surreal...and I honestly had no issue with that. It was a weird trip into a clever, yet insane, mind. At times it could even be very meta, with Moriarty popping up to berate Sherlock for all of his mistakes, while Watson would lecture Sherlock about what he means to readers/watchers. In fact I liked how Watson was portrayed in Sherlock's 19th century head. He came off more like the buffoon that earlier adaptations portrayed him as and not as the compassionate, yet competent, thrill seeker that he is in the main plot line of the show. Its a sign that what Sherlock thinks is real is not always true.

That being said, I can understand if others didn't like "The Abonimable Bride" (I seriously can't type the word abominable without thinking of a yeti). Many of the reasons why I liked the episode could easily be reasons why people hated it. More importantly, we need to talk about the speech where Sherlock explained feminism right after uncovering the people who committed the murders. Now I consider myself a feminist and I completely understand if people were upset. That being said, I think those who were outraged missed a very important aspect of the show: Sherlock isn't a good guy.

He is certainly a protagonist, but he is not hero. In his own words he is a "high-functioning sociopath" who is "on the side of the angels" but don't think for one second that he is one. It is completely natural for such a character to give a speech like that. He doesn't understand women and he doesn't care to. In fact, he is so self-centered that he doesn't understand many things we take for granted. Most importantly, he is a junkie. If its not the thrill of a case to solve, its hard drugs.

On top of all that, as soon as Sherlock finished his now infamous speech, Moriarty showed up to tell Sherlock how stupid he was to think all of that was true. I sort of interpreted this as the show's creators telling the audience not to take this too seriously. More importantly, who was the person who ultimately saved Sherlock from his own internal demons? Watson, of course. He has been, and will always be, the true hero of that show.

Of course, that could just be my interpretation of a touchy subject and in truth I could be completely wrong. Still it gave us something to debate on the Internet and I am a firm believer that in the long run it will all make us better people. In the end, I expected to see a non-canon holiday special and instead I got another episode of Sherlock that was certainly unique. Whether you liked it or hated it, Sherlock continues to give us a reason to keep watching, if only to see what crazy stunt they are going to pull next.