1635: A Parcel of Rogues by Eric Flint & Andrew Dennis

Book #20 in the multiple New York Times best-selling Ring of Fire series. When the diplomatic embassy from the United States of Europe was freed from the Tower of London during the Baltic War, most of its members returned to the continent. But some remained behind in Britain, including notorious enemy to the crown Oliver Cromwell. Now,  the hunt for Cromwell is on, with King Charles himself demanding Cromwell’s head.

When the diplomatic embassy from the United States of Europe was freed from the Tower of London during the Baltic War, most of its members returned to the continent. But some remained behind in Britain: Oliver Cromwell and a few companions, including the sharpshooter Julie Sims, her Scot husband Alex Mackay, and Cromwell’s Irish-American self-appointed watchdog Darryl McCarthy.

Soon, the hunt is on for the most notorious rebel in English history, with King Charles himself demanding Cromwell’s head. The new chief minister Richard Boyle, Earl of Cork, brings over from Ireland a notorious crew of cutthroats led by the man called Finnegan to track down and capture the escapees from the Tower.

The hunt passes through England and into Scotland, where the conflict between Cromwell and his companions and their would-be captors becomes embroiled in Scotland’s politics, which are every bit as savage and ruthless as Finnegan and his men. To make things still more conflicted and confused, the time Darryl McCarthy spends fighting alongside Cromwell forces him against his will to admire and respect—and even like—the man, despite Cromwell’s demonic reputation among all self-respecting Irish nationalist families like Darryl’s own.

It’s a Gordian knot anywhere you look—until Julie Sims brings out her rifle. Now it’s the turn of Scot partisans and English lords and Irish toughs to learn the lesson already learned on the continent:

A safe distance isn’t what you think it is. Not after the American angel of death spreads her wings.

Having taken down a terrorist organization bent on traveling through time to overthrow the government, Sam figured she was done dealing with the unbelievable. Finally out of backwater Alabama, she’s the senior agent in a Florida district, and her life is back on track.

Until a scientist is found dead. And then an eco-terrorist. And then a clone of herself…again.

As the pieces start to fall together, they paint a picture that seems to defy everything they know about time and physics. But the bodies are all too real, and by partnering up with Agent MacKenzie once more, they might just figure out what’s going on. And when.

Play "What if?" with the original trilogy in a series of tales exploring the endless possibilities of Star Wars. How would A New Hope have gone if Luke Skywalker missed the target in his attack on the Death Star? What would have become of the Rebel Alliance if Luke perished in the icy wastelands of Hoth during The Empire Strikes Back? What if Return of the Jedi's rescue of Han Solo had gone badly wrong? And in the ultimate alternate take on the galaxy far, far away, follow Annikin Starkiller into The Star Wars in an epic based on the original draft of George Lucas' screenplay!

Bestselling author Jodi Taylor is back with a brand new Chronicles of St Mary's short story.

Ever wondered how it all began?

It’s two years since the final victory at the Battersea Barricades. The fighting might be finished, but for Dr Bairstow, just now setting up St Mary's, the struggle is only beginning.

How will he assemble his team?

From where will his funding come?

How can he overcome the massed ranks of the Society for the Protection of Historical Buildings?

How do stolen furniture, a practical demonstration at the Stirrup Charge at Waterloo, students’ alcohol-ridden urine, a widowed urban guerrilla, a young man wearing exciting knitwear, and four naked security guards all combine to become the St Mary’s of the future?

1635: The Eastern Front by Eric Flint 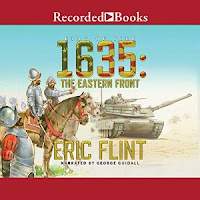 A cosmic accident sets the modern town of Grantville, West Virginia, down in war-torn 17th-century Europe, and a new nation is forged. Now after carving a place for itself among the struggling powers of Western Europe, Grantville must throw up its eastern bulwarks against Dark Age domination. But the challenge for the down-time Eastern European horde is just as great: how to crawl out of a deeper feudal shadow than any in the West - and step into the light of freedom.