There are two ways get featured on Map Monday. You can either make a spectacular map or you can bug me enough about it until I just surrender and put one of your maps up just to get some peace. Lucky for our next alternate cartographer, she has managed to do both. 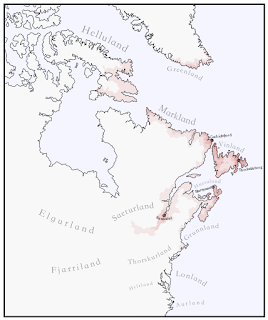 Above is what I am calling "Population Density Map of Vinland" and it is created by Rebecca "Upvoteanthology" Stirling. Some of you may know her work from the "Historians talk about Rome all the time, but what if Ancient Egypt never fell?" and "One Way to Divide Canada: Ethnicity" articles. I have seen Rebecca hone her skills as map maker over the months I have known her and I have shared some her maps over Facebook and Twitter, but none have caught my eye enough to be featured on Map Monday...until now.

The map above is in a minimalist style that I like that I am assuming shows the population density of Norse America. Admittedly I am wondering what happened to the Great Lakes, because a maritime people like the Vikings would have probably found a way to get their ships on those bodies of water, but otherwise it is a nice looking map that inspires the mind to speculate. Good job, Rebecca...now stop asking me to put you on Map Monday! :-P

Honorable mention this week goes out to "A Kingdom Divided" by RoyalPsycho (see the scenario here).