Weekly Update #210! The British Lion, The London That Never Was and the History of Fallout.

I don't think I am going to meet my Goodreads reading challenge this year. I set it for 60 books and last I checked I was only at 29 (although I should have it to 30 by tomorrow). I always pictured myself as a fast reader, but then I also need to set time to write and record videos for my YouTube channel. That leaves me with less time to read like I used to. O well, all I can do now is set a more realistic goal for next year now that I have a base line to start from.

Book of the Week: The British Lion by Tony Schumacher

Tony Schumacher's The British Lion (sequel to the Sidewise-nominated The Darkest Hour) dropped a couple weeks ago and I will be releasing my text review of it tomorrow on Amazing Stories. Still for those who don't want to wait until then to learn more about the book, here is the description from Amazon:

You can also check out the interview Tony did on Huff Post, where he talks about the themes of The British Lion and what it is like to be a writer.

Pics of the Week: London That Never Was

The Guardian released several pictures of London buildings that at one point or another were proposed to be built but never were. Any of them could have changed the face of the city, but here is my favorite: 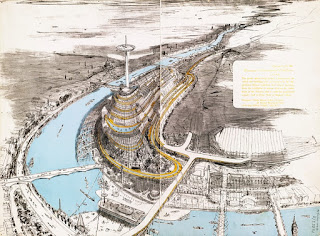 This was a proposed design for the Royal Festival Hall complex and I believe it may have been submitted sometime in the 1940s. I just like it because of its futuristic look that sort of resembles those sci-fi cities you would see in movies from in and around that time period. Of course, that is just my opinion and I highly recommend you check out the article. Who knows? You may get some ideas for your alternate history of London.

Video of the Week: History of the Fallout World by Alternate History Hub

So Fallout 4 is apparently a big deal. So big that Cody of the Alternate History Hub decided to do a whole video on the history and politics of the Fallout universe. Check it out below: