For this Map Monday I wanted to talk about Martin23230 of AlternateHistory.com's Kingdom of Maryland, which a squeal to an earlier map he did featuring a surviving British Commonwealth. Here it is below: 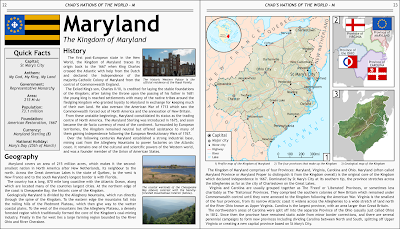 This map features some of my favorite tropes in alternate history including a Stuart kingdom in North America and an East Coast that isn't dominated entirely by English-speakers. The story is that Charles I flees across the Atlantic with the help of the Dutch and establishes control of the Catholic majority colony of Maryland. This is actually an odd choice by Martin since Virginia was actually called "The Old Dominion" by Charles II because the colony remained loyal to the Stuarts during the Civil War and considering it was the larger and more developed colony, it is perhaps more plausible for Charles I to go there instead of Maryland. I'm also pretty sure at this time Maryland was majority Protestant so perhaps it wasn't a great idea for Charles I to come ashore.

Plausibility issues regarding the point of divergence aside, eventually the new kingdom conquers the rest of British North America, but they never expand to the Pacific like the United States did in our timeline. They are relatively small, but prosperous, nation of this alternate North America that includes two French states, a New Netherlands and uber-Florida. The map itself is in a style of an encyclopedia article and it is very well done, despite a couple of typos in the text. I enjoy the black stripes of the flag as well. This means that while the underlying scenario has much to be desired, it is still a good map with strong supporting images.

Honorable mentions this week goes out the Federal Republic of New Afrika by Kyriakos-Cyp and the Chicago International Map Fair (Oct 23-25). If you would like to submit a map for the next Map Monday, email me at ahwupdate at gmail dot com with your map attached and a brief description in the body of the email.