Was the American Revolution a Mistake? 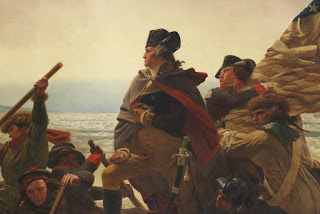 With Americans preparing to celebrate their independence tomorrow, the inevitable counterfactual about what would happen if the Thirteen Colonies never left the British Empire was bound to appear. The one that seemed to catch many alternate historians attention was Dylan Matthews' "3 reasons the American Revolution was a mistake" on Vox. In it Dylan argues the world would be a better place if the Americans were still taking orders from London, but is he right?

To Dylan's credit he does actually cite sources for his argument and he admitted that no one can be entirely certain what can happen when you start changing history. Nevertheless, I am not entirely convinced the world would be a better place without the USA (see Without Warning for a modern take on what I just said). To prove this I will like to address Dylan's three main reasons for why the world would be a better place without the American Revolution: "slavery would've been abolished earlier, American Indians would've faced rampant persecution but not the outright ethnic cleansing Andrew Jackson and other American leaders perpetrated, and America would have a parliamentary system of government that makes policymaking easier and lessens the risk of democratic collapse."

Lets start with slavery. There shouldn't be any doubt in one's mind that slavery was a bad thing. Regardless of what the most virulent Confederate apologist will say, slavery lasted longer than it should have in America. Thus a common argument against the Revolution in our timeline is that slavery in America would have ended earlier with the passing of the Slavery Abolition Act in 1833. Dylan argues that if the Americans never rebelled, slavery in America would have ended around the same time. Its not a bad argument and certainly many alternate historians have factored in an earlier end of slavery in a still British North America.

That being said, I though Dylan dismissed the power of the southern colonies in his alternate history to quickly by just assuming London would ignore them. For example, what if the American Revolution was avoided because the British actually did allow the colonies to send representatives to Parliament? In this situation, the southern colonies could argue against abolition and even delay the passing of the Slavery Abolition Act. When the act is eventually passed, it could lead to a violent rebellion, much like the election of Abraham Lincoln led to the South seceding and starting the American Civil War. Thus the American Revolution could still have happened and may have been successful in this world still if other European powers sided with the rebels. Even if a violent revolt didn't happen, the implied argument that the freed slaves would have less discrimination in a British North America is rather week when you consider that the former British dominion of South Africa didn't get rid of its racial segregation until 1994, while in America it can be argued the last of the overtly racist laws were repealed in 1968.

Again that is just one scenario out of many and Dylan's argument regarding Native Americans having better treatment under a British North America is his strongest point. While some may find its debatable whether Canada treated its native peoples better than the United States and certainly both countries have horrible histories when it comes to their relations with the tribes, I still felt Dylan did a good job at arguing Native Americans would have a better experience under a British North America. I myself argued as much in my article on common mistakes found in American Revolution alternate histories, suggesting that we could say a North America dotted by native states much like the princely states of India. Today the closest we come to such an entity is Nunavut, which again is another point in favor of Dylan's argument.

I still, however, have some nitpicks. It bares mention that regardless whether the rebels were defeated or the Revolutionary War was avoided altogether, the American's negative reaction to the Royal Proclamation of 1763 will need to be addressed. For Dylan's vision to work out the Royal Proclamation would likely need to be repealed or just ignored. Considering the number of treaties, like the Treaty of Fort Stanwix, that opened up westward settlement long before the American Revolution, its likely that a still British North America won't stop America's drive to the Pacific. This doesn't necessarily mean Dylan's argument is null, but it just means that when push comes to shove, the British government could easily side with the colonists and history plays out as it did once again.

We now move from Dylan's strongest point to his weakest: that America's system of government would be better if we stuck with Britain. Its true that there is a lot of supporting evidence that suggests a parliamentary system is the best form of democracy, but Dylan ignored many of the criticisms, such as the possibility of abusing the election calendar and not being able to directly elect a Prime Minister. On top of that, even today some British citizens aren't happy with their version of democracy. All that aside, what really makes this argument weak is that Dylan describes the United States government as a presidential democracy and even criticizes our system because: "The US is saddled with a Senate that gives Wyoming the same power as California, which has over 66 times as many people."

What Dylan forgets is that the United States is a federation, built by in part by states who did not want to become overwhelmed by their more populous brothers. The states of the United States are all equal members who retain power often ceded to the central government by provinces or other types national sub-divisions found in other countries. This system means that people won't be discriminated against by the federal government simply based on their geographical location. Thus richer and more populous states can't simply ignore the rest of the country when championing their proposals. Yes it can make for an ineffective form of government, but also avoids issues found in the British system. For example, Scottish and Welsh MPs can vote on matters effecting only England, but English MPs can't vote on matters only effecting Scotland and Wales. There is also something to be said by how long the United States Constitution has lasted compared to other governing documents of history, showcasing how flexible this short document has been with the changing times.

So while Dylan does make some good points, he nevertheless falls into trap that many do when they try to create a "better world". He strives so hard to turn history in the path he wants to take it that he ignores the more plausible directions it could have gone in favor of his overall message. His article is not bad when it comes to social commentary, but its value as alternate history is minimal.