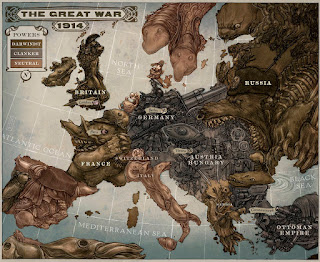 Some background first. In 1987, KW Jeter came up with the term "steampunk" to describe a new literary movement where stories were set primarily in Victorian England or the American Wild West, but featured advanced technology and modern social mores. As mentioned before many of these stories had alternate history elements. Good examples include The Warlord of the Air and The Difference Engine, which are both alternate history novels that were influential on early steampunk creators.

So the two genres, alternate history and steampunk, can be considered at the very least cousins in a sense. Despite these shared origins, the history of steampunk and alternate history would begin to diverge at this point. While alternate history remained primarily a literary genre with most communication between fans and creators taking place on the Internet, steampunk would evolve into an atheistic movement that received mainstream acceptance and was embraced by many different formats. Heck there is even a realty television show dedicated to steampunk fashion.

The divide has only grown as steampunk's popularity increases. In 2007, searches for “steampunk” on Google began to trend higher than “alternate history”. In 2013, an IBM supercomputer even predicted that steampunk would be the next big retail trend. Some alternate historians even believe the increase in popularity in steampunk has begun to negatively affect the genre. For example, Robert Schmunk, Uchronia founder and former Sidewise judge, told Motherboard:


In the past several years, alternate history has been fading, or perhaps I should say morphing, because there’s been a big increase in the publication of steampunk stories and novels…Many steampunk works are legitimately alternate history, but a lot are not…I think the Roman Empire theme has faded, and perhaps the ‘Hitler wins’ theme just a bit, also…’The South wins the Civil War’ seems to be hanging in there, especially as this is often used as part of the background for alternate-history-steampunk works.

Steampunk, while often set during different historical periods, often plays fast and loose with our history and sometimes drop it altogether and the laws of physics along with it. Thus steampunk can be set on a magical world where steam powered mecha exist alongside late 19th century mores, even if the place names don't match anything on this Earth. Blatant disregard for plausibility just for the sake of what looks or sounds cool is enough to set off any serious alternate historian, regardless if the the subject is popular with the mainstream or not. So do I think alternate historians hate steampunk? No, they just don't like bad alternate history.

Personally I have no major issues with steampunk and can even recommend a few good steampunk books (like Cherie Priest's Boneshaker or Alan Gratz's The League of Seven). Being a lover of stories, however, I actually have no plans to cosplay as some intrepid airship pilot. Its not because I think its silly or stupid, its just that I am not interested. I will always put the story over everything else (and there may be many other alternate historians who will agree with me), but I still think there can be peace between steampunk and alternate history. Hey, we are family after all.