Weekly Update #205! President Thatcher, The Enemy Within and What if Africa Was Never Colonized?

Almost didn't have something to post on Friday. I had been lazy about planning for something that day and when I finally sat down Thursday night to cobble something together I realized that I didn't have any ideas. Despondent, I complained to my wife, Alana, about my problem. She suggested I start "free writing" or journaling where I just wrote down whatever I was thinking so I could return to it later when I needed ideas to write about. I told her it was a good idea, but it wouldn't help me now since I needed an idea for tomorrow.

Besides, I explained to her, I already had several place where I kept "loose ideas". There were topics that I thought I could write about later when or if they were ever more developed. I had already checked most of these ideas, but then inspiration struck, and I realized I didn't check my notes from my paper "Warping History: An Overview of Fans and Creators of Alternate History in the Internet Age". Suddenly my notes regarding alternate historians relationship with steampunk fans, which I had removed from a later draft because I thought it didn't fit the topic, made for an interesting editorial. So I gave my wife a big kiss of thanks and went to write Do Alternate Historians Hate Steampunk? Not only was it the most viewed article from last week, but it even got linked to by SF Signal in their daily SF/F/H Link Post. Not bad for something I put together at the last minute.

In other news, I will be attending Windycon 42 on November 13-15. Steven Silver, founder of the Sidewise Awards, is putting together a panel where I will debate whether alternate history is science fiction with fellow Sidewise judge and Point of Divergence APA founder, Jim Rittenhouse. I think it will be a lot of fun, so if you happen to be in the Chicagoland area, please stop by and check us out. If you can't make it, don't worry, I'm hoping to record the panel and put it on my channel.

Headline: President Margaret Thatcher to Appear on the $10 Bill 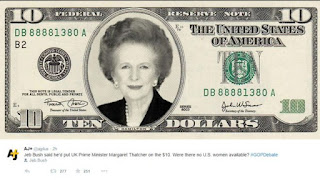 Okay that headline above is a complete alternate history. In reality, what happened was that Republican presidential candidate, Jeb Bush, answered at the recent Republican presidential debate that he would put Margaret Thatcher on the $10 bill now the US Treasury would be adding a woman to it. This answer drew both applause (because Thatcher is a well respected British Prime Minister in America, especially among conservatives) and criticism (because Thatcher isn't American and there must be some American woman from history who would be a better choice). Jeb, realizing the Iron Lady wasn't the best choice he could make, has since tried to deflect attention from his answer, but this alternate historian still couldn't help talking about it, mostly because of the picture above.

Could Margaret Thatcher get on the $10 bill in some alternate history? The first idea that came to mind was a Joe Steele-esque scenario, where Thatcher parents immigrate to America sometime after she is conceived, but before she is born. Thus she gets American citizenship, goes into politics, defeats Reagan for the Republican nomination and goes on to be the first female President. Perhaps if she is popular enough during her two terms, there is a movement to put her on the $10 bill after she dies.

Of course this scenario assumes she has the same personality and interest in politics, despite growing up in America instead of Britain, which is one of the big issues I had with Joe Steele. On top of that, not everyone needs to be president to get their face on American currency (i.e. Benjamin Franklin and Alexander Hamilton). Still it was the first idea I came up with. Do you have any ideas for a point of divergence that would get Thatcher on the $10 Bill?

Those interested in more weird history should check out James Hasik's article on what if aircraft carriers were never invented on Real Clear Defense and read up on the Game of Thrones fan theory that suggests Bran Stark is a time traveler.

Book of the Week: The Enemy Within by Kristine Kathryn Rusch

Today's book of the week goes to Kristine Kathryn Rusch's The Enemy Within. Here is the description from Amazon:

One of Kristine Kathryn Rusch’s most acclaimed short stories becomes one of her most original novels. February, 1964: Two men die in a squalid alley in a bad neighborhood. New York Homicide Detective Seamus O’Reilly receives the shock of his life when he looks at the men’s identification: J. Edgar Hoover, the famous, tyrannical director of the FBI, and his number one assistant, Clyde Tolson. O’Reilly teams up with FBI agent Frank Bryce to solve the second high-level assassination in only three months. Because in November of the previous year, someone assassinated President John F. Kennedy. The cop and the FBI agent must determine if the same shadowy organization committed all three murders. To do so, they must act quickly before some of the nation’s most powerful men—from Kennedy’s brother, Attorney General Robert F. Kennedy, to the President of the United States, Lyndon Baines Johnson—do something rash to keep Hoover’s secrets from ever becoming public. In our world, Hoover kept his secrets until long after his death. In Seamus O’Reilly’s world, Hoover’s secrets get him killed. The Enemy Within offers alternate history so plausible that only Kristine Kathryn Rusch could have written it. Winner of the 2014 Sidewise Award for Best Long Form Alternate History.

For those who don't know, The Enemy Within is a 2014 Long-Form Sidewise Winner and Kristine talked about the award, and her upcoming story in Tales from the Vatican Vaults, on her blog. I plan to review The Enemy Within this week so stay tuned for that.

In the meantime, you may also want to check out Democracy, by Alecos Papadatos and Annie Di Donna, which Rob Bricken of io9 calls the "anti-300".

Video of the Week: What if Africa Was Never Colonized? by Alternate History Hub

The video of the week goes out to Alternate History Hub's What if Africa Was Never Colonized?. Check it out below:
Although the question itself is a little ASB, I thought Cody did a good job overall of presenting a fair and balanced scenario. If you want more fun hypotheticals, don't forget to check out Test Tube's What If Iran And Israel Went To War? or my recent Trope Talk video on the "No Hitler" trope:
Thanks for watching!