Book Review: The Desert and the Blade by SM Stirling 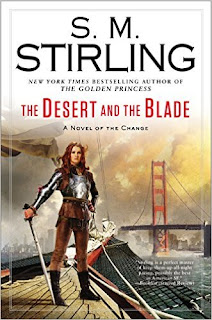 Many of you who follow my reviews know that I am a big fan of SM Stirling's Emberverse (or Change) series. Hell I am responsible for creating the Wikipedia article on the series (O the things you can do when you are an intern and have nothing to do at work). You know what I like most about this series? Unlike many post-apocalyptic tales, the Emberverse isn't dreary or depressing with cliche stories about pointless survival. The Emberverse is not just about people surviving, but rebuilding and creating a new world in the process. Its an alternate history series as well, but of the alien space bats variety. Enough about the series as a whole, lets take a look at The Desert and the Blade, the newest installment in the Emberverse.

The Desert and the Blade takes up right after The Golden Princess. Órlaith, Crown Princess of Montival, and her followers are helping Reiko, Empress of Japan, and her band of loyal samurai recover the "Grass Cutting Sword", one of the three Imperial Regalia of Japan. The sword is being kept in a "castle" somewhere in California, which was devastated and depopulated by the Change, except for a few Montival colonies, some tiny survivor communities and several tribes of Eaters (cannibalistic offspring of the few people who survived the loss of modern technology in 1998 by feasting on the only remaining source of readily available meat: humans).

Their quest is not an easy one as they are hounded by Haida pirates and Korean warriors, who are ruled by the grandson of Kim Jong-il (and remind me a lot of the Russians from The Peshawar Lancers, if you know what I mean) and want to stop the Japanese from recovering the sword. On the way the questors will battle armies of Eaters, be aided by Saxon warriors, meet Jewish desert nomads and come upon a community of aging hippies who worry about how the modern world will change their way of life...which is actually kind of funny when you come to think of it.

Like most long running series, The Desert and the Blade suffers from lengthy reintroductions to characters and settings that anyone who started from the beginning should already be familiar with. I know authors do it on the off chance that there is a reader who is entering the series from this book and you see this a lot in comics, but for long time readers it can be a slog to get through. There are also some references to events from previous stories, which are not given lengthy explanations, so new readers are going to be confused at times anyway.

In fact, Stirling works in a lot of characters and places from The Change: Tales of Downfall and Rebirth anthology and I don't mean just quick cameos. Many characters originally introduced in those stories have become important, plot-turning characters. This isn't a bad thing (and I enjoyed the quick epilogue to Walter John Williams‘ “The Venetian Dialectic”, which was my favorite story from the anthology) since it shows Stirling is happy to have other authors play around in his universe, but it means one more book new readers have to pick to get the full enjoyment of The Desert and the Blade.

Common issues with long running series aside, The Desert and the Blade is still a good book. I would say its even better than The Golden Princess, since that book featured a lot of characterization and worldbuilding, and little action. This book balances all three better, giving us fun neo-Medieval conflict and Clarksian magic, along with character development and beautiful descriptions of post-Change California and its peoples. I especially liked the Jewish nomads and hope to see more of them in the future, but then again I have always been a sucker for nomadic people ever since I took a class on them in college. Perhaps that is why I always preferred the Bearkillers perspective over the Clan Mackenzie in the original Emberverse trilogy, even if they were only briefly migratory.

If there was one major issue I had with the book overall, it was the ending. It wasn't bad per se, but it just felt rushed. I will try to be as vague as possible to avoid spoilers, so if you haven't read the book yet and your worried I will give something away, I recommend skipping the next paragraph and just go to the conclusion.

Anywho, one character discovers her brother, who was missing and presumed dead, is alive and under the spell of the bad guys. This could have been an intense, emotional scene, but weakened by the fact that we really didn't know much about the brother and some more time sharing how he was important to the character and giving a couple more pages to the emotional trauma the character was experiencing would have made the ending all the more powerful. Additionally, after the issue with the brother was resolved, that same character comforts another character who just got his hand chopped off by saying she thinks his son would make a good husband. Perhaps given the context of their culture and relationship this is a perfectly normal conversation...but wouldn't it be a more appropriate conversation for when he is recovering in a hospital and feeling bad about losing his hand? Again, it wasn't a bad ending, it just felt rushed.

Despite the usual issues that come with long-running book series and my own issues with the ending, The Desert and the Blade still earns a recommendation from me. Stirling continues to impress me with his world-building skills, while featuring strong, yet complex, female characters in speculative fiction. The next book in the Emberverse is going to be titled Prince John and I assume its going to involve Órlaith's younger brother helping John Birmingham, who is the king of Darwin, battle bad guys in the South Pacific (alternate history is weird). Tune in next year for that review.

Email ThisBlogThis!Share to TwitterShare to FacebookShare to Pinterest
Labels: Book Review, Emberverse, SM Stirling, The Desert and the Blade