Hard to believe I am only 5 Weekly Updates away from #200. As I did for Weekly Update #100, I will record a special video message for all of our followers. Hopefully I will have some interesting news to share with you all.

In other news, I am going to retire the Videos for Alternate Historians segment. It has never been as successful as the other long running series of posts and I need to let it go. To be brutally honest, Videos for Alternate Historians has always been a cop out for when I didn't have the time or energy to write anything else. I am going to stop being lazy and really push myself to write more original content for the blog. I am still going to post YouTube videos I think you will enjoy on Facebook and Twitter and I may even share a "Video of the Week" here on Weekly Update, but I am no longer going to be dedicating a whole post to it.

Speeches that Never Were... 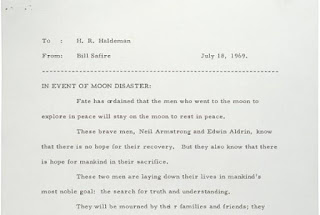 Did you guys read "5 Undelivered Speeches That Would Have Changed the Course of History" by Lucas Reilly on Mental Floss?

As the title states, the article lists five speeches that were never given due to historical events happening differently. Some of them are rather well known, such as Eisenhower's speech for a D-Day failure and Nixon's speech in the event of a Moon disaster, but there are few others on there that don't get a lot of attention, like Nixon's speech about not resigning and JFK's speech he would have given in Dallas if he was not assassinated.

What I like about this article is that it highlights how often politicians, general and other leaders have alternative speeches prepared so they can be ready for whatever happens next.

Do you know of any speeches that should have been added to the list?

In case you missed it, the new alternate history podcast, The World That Wasn't is now on Facebook and Twitter. For those who don't know, TWTW is an alternate history talk show featuring our two hosts (Nicholas Davidge and Jamie Toal...got it right this time) and a guest historian. Their first episode focused on the Battle of Britain and you can read my review of it here.

Go check out my review and in the meantime, don't forget to follow TWTW on whatever social media platform you prefer. It is important to support all alternate historians out there. We are few in number, but we make up for it with our incredible passion for history and what ifs.