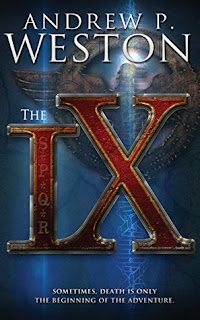 I really wanted to enjoy The IX by Andrew P. Weston. It had a really cool concept. Humans on the verge of death are pulled from different eras of the past by a powerful alien entity to fight an army of seemingly endless murder machines, all the while having to overcome the cultural and language barriers to become an effective fighting force. Sounds like a fun action romp with a level of sophistication. Its in the execution, however, that the book lost me.

We learn that an alien race, called the Ardenese, which are described as really tall humanoids with large foreheards (sort of like the aliens from This Island Earth) are on the verge of extinction. Another alien race of energy beings who feed off the bio-electrical fields generated by other organic beings (sort of like the aliens from Final Fantasy: The Spirits Within), known as the Horde, are winning their war against the Ardenese, who are holed up in their last city. The Ardenese, however, have a plan. They will upload their minds into an incredibly advanced super-computer, called the Architect, that will scour space and time to discover an alien race that can fight for them until the Horde is defeated and they can repopulate their plant.

Of course, that race is humanity, and at first the Architect only pulls humans from our distant future, but their advanced energy weapons have no effect on the Horde. A lucky break happens, however, when it is discovered that the Horde are obliterated by contact with iron. Thus when the ninth wave of human draftees are brought in, they come from eras of time where iron is still used in their weapons. These include, the Ninth Legion of Rome from 120 AD, a US Calvary Regiment from 1860 and a special forces squad from the mid-21st century.

Even with the time travel, alternate history content is minimal or non-existent depending on how you perceive the history being presented by Weston. Let me explain: the characters from 1860 include a US Cavalry company and several Native Americans on their way to negotiate a peace treaty for Senator Lincoln with an alliance of the Cree, Lakota, Sioux and Apache. They are prevented from doing so after rogue members of the company lead them into a trap because there is grand conspiracy involving the aforementioned tribes and several southern states (due to Sam Houston's involvement) who want to overthrow the US government.

Where do I begin? First off, Lincoln was never a senator. Second, those tribes are scattered between Canada and Northern Mexico and all speak different languages, so the chances of them forming some alliance like the one described in the book is implausible. Plus, the Lakota are actually a sub-group of the Sioux, but the author makes it very clear throughout the book that they are a separate tribe. Third, Sam Houston as governor of Texas actually opposed his state's secession from the Union during the American Civil War so the idea of him being part of some coup attempt seems far-fetched. Finally, Weston seems to imply to real reason the Civil War began was because the Southerners and Great Plains Indians were just trying to overthrow a central government they didn't believe in anymore, which is a troublesome theory about that period of history for someone to have in my opinion.

Now this may be the alternate history, but there really is no clear point of divergence and they do come from the same timeline as the Ninth Legion. To be fair Weston did a better job of presenting the history of the Legion. There are some historians who believe they disappeared in modern-day Scotland, even if there is evidence that the whole or portions of the legion survived on the continent. Problems occur with his description of the Caledonians they were fighting before being taken to Arden. One tribe is called the Iceni, which is actually the name of tribe that inhabited modern-day Norfolk during the Roman occupation of England, and while my preliminary research does show they occasionally practiced cannibalism, the description in the book of groups of them stopping to feast on wounded Roman soldiers like zombies from The Walking Dead was just too silly to take seriously. They also referred to themselves as Caledonians, which is wrong since "Caledonia" was the name the Greeks/Romans gave to modern-day Scotland and the native inhabitants would have called themselves something else.

Besides the bad history, how was the rest of the book? Well, not good. The book is poorly written with too much tell and not enough show. There was also a lot of "As You Know, Bob" moments where one character explains to another character some aspect of the story that both should already know. This is done to provide important exposition to the reader, but it is also not how people normally talk to each other. In fact, most of the dialogue is stilted. This wouldn't be so bad if the book was heavier on the action, which Weston writes pretty well, but most of The IX is just talking about things that are just boring. Even the inner thoughts of the characters are uninteresting and, to be frank, it was hard to tell when they were doing that. Sometimes the inner monologues were in italics, as is traditional in most books, but other times they weren't in italics or highlighted in any way to differentiate them from the rest of the text.

The characters from the future are bland and indistinguishable from each other, despite many coming from time periods centuries apart. Even the characters from the past come off more like stereotypes instead of well researched characters, although they are amazingly smart and are somehow able to point out obvious things about the enemy that the future humans, who have been fighting them for much longer than the new arrivals. Also everyone seemed to have taken the fact that they will never see their homes or loved ones again fairly well and drop old animosities almost instantly so they can fight in a war they've never asked for. Ignoring the psychological impact of what the Ardenese did to the humans it dragged into their war was a grave omission in my opinion. Instead what we do get is overused tropes like ancient aliens and hand-waving issues such as language barriers thanks to magical technology.

To be completely honest, I didn't finish this book. I gave up on it after I was more than halfway done. What was the last straw for me was when I was forced to read a five page memo on how an iron ore mining operation was going. From the context of the book, the memo was being proofread by a character before he sent it to his superiors. I'm sorry, but that is just lame. I know background info is both important and difficult to express to readers in an entertaining way, but their are ways to do it. Take a “Hot Night at the Hopping Toad" by SM Stirling. Although not my favorite story in The Change, it still presented what life was like in a post-apocalyptic college town through the eyes of two likable and interesting characters who were catching up with each other over dinner and drinks at a local bar. Then, just to keep things interesting, there is bar fight, someone dies and a murderer needs to be uncovered. Stirling added conflict to make his story interesting and I never saw the conflict in The IX. The Horde never seemed like a real threat and from what I did read, I never even saw them kill a single human. Without real conflict, it is hard to have a good story.

Despite what I said above, I'm once again the lone voice of dissent in a sea of praise. The IX has a ton of good reviews on both Amazon and Goodreads that I just don't understand. Maybe the book picks up in the second half, but if a book can't hold my attention after 300 pages, I don't see any reason to continue with it. I will admit that when there is action happening the book can be enjoyable and Weston certainly praises the work of soldiers in this novel, so if you like that then go ahead and pick up a copy. Otherwise, I can't recommend The IX. I can, recommend, The Misplaced Legion and its sequels by Harry Turtledove, which has similar themes to The IX and is better written.

Matt Mitrovich is the founder and editor of Alternate History Weekly Update, a blogger on Amazing Stories and a Sidewise Awards for Alternate History judge. When not writing he works as an attorney, enjoys life with his beautiful wife Alana and prepares for the day when travel between parallel universes becomes a reality. You can follow him on Facebook, Twitter and YouTube. Learn how you can support his alternate history projects on Patreon.
Posted by Mitro at 10:49 AM