This week's Map Monday is another entry to the Pale Continent map contest being held at AlternateHistory.com (which is now opened for voting). It is from SRegan (who first appeared on Map Monday with his ADAIR/ADARI/KI map) and it is titled "Wikenlaw!": 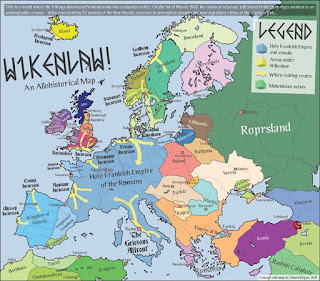 Learning what we can from the map above and the short story that came with it, in this world the Vikings discovered the new world centuries earlier and this somehow butterflies away the Renaissance. Thus a stagnant Europe finds itself at the mercy of raiders and conquerors from across the Atlantic.

Much like "The Iron Shirts" by Michael F. Flynn, Native Americans have crossed the ocean first, but as conquerors and not refugees as in Flynn's story. I like how SRegan factored in time to recover from European diseases, but I wonder how long the Wiken can maintain their positions in Europe (the name of which is a play off the Danelaw of OTL). Still a pretty cool map that highlights what it must have been like in Africa when Europeans started coming to shore in greater numbers.

Honorable mentions this week go out to "Territories of the Empire of Kambujia" by ThePicene and "World War 2.5" by Rvbomally. If you want to submit a map for the next Map Monday, email me at ahwupdate at gmail dot com with your map attached and a brief description in the body of the email.